The Gentle Art Of Fly Fishing

I have to apologize, there's some course language in this video below. And I should also apologize to Brown Beard, my fishing partner featured in this video... but it just makes me laugh hard every time.


Sure we fly fishermen like to espouse the beauty and tranquil "art" of fly fishing. But like anything else worth pursuing, sometimes it makes you angry.

On the Friday before the above video was shot, I and my other good fishing partner, Greg took our float tubes to Blass Lake. Greg has his own fins now, but I had been lending him a pair of pretty nice scuba diving fins that my brother gave me. I do own "float tube fins" but frankly, they suck. I told Greg over and over not to lose them during each of the 3 outings he borrowed them, and he didn't. Thanks Greg. Now he has his own fins and it was time for me to experience the speed and ease of these Oceanic rockets. Foolishly I put them on at the bank and tried to walk backwards into this muddy, weedy lake.

After stumbling 6 feet from the shore, I notice one fin was missing. I didn't panic immediately. It must be in front of me and there's only a few feet between me and the shore. Fifteen minutes later, we had our shirts off and were dredging a 10x10 foot area off the bank in this black water. Curious, presumably chuckling fishermen in boats watched as we probed the murky, weedy, stinky mud - pulling up logs, cans, snails and other disgusting things, trying to find my flipper. After a half an hour, I said "I'll just have to tell my brother we tried really hard to find it."

Defeated, we were plodding out of the Blass Lake slime when Greg says "here it is". It was under 5 inches of water, 2 feet from the shore.

After that episode, we fished until dark catching some bluegill and small bass. A fisherman asked me what we were looking for and sadly, I couldn't think of a smart ass response.

The next day it was time to get back to the trout. I went to one of my currently favorite streams, Melancthon Creek, part of the Pine River system. I like the Melancthon because of its proximity to my home, trouty bridges, awesomely carved rock formations and deep murky looking holes in some places that hold some chunky brown trout. It can be a noisy place though. Highway 80, which follows the creek, seems to be a major truck route. You will want to gear up on the side of the car opposite to the road. 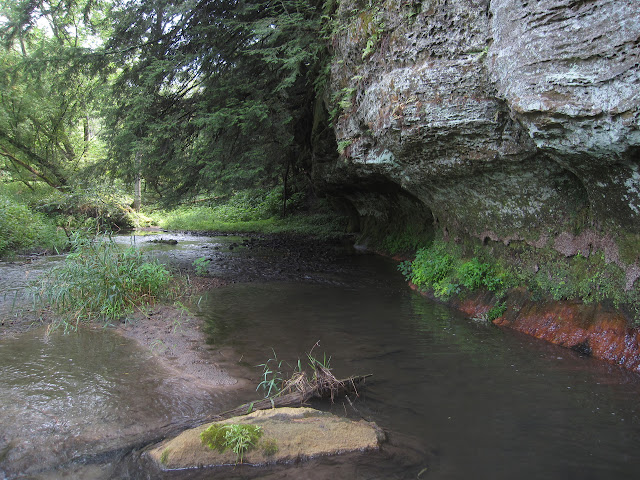 It was a struggle all day, in part due to the heat. I managed 3 keepers for the day and left rather early.

Moving along to Sunday, Brown Beard and I headed up to the Coon Valley area. At first I tried to take us to Lindahl Creek because we've never been there. We've still never been there because I didn't find it, but instead ended up on Coon Creek a little bit west of Coon Valley. I got down to the creek edge and caught a 11" brown on my first cast. Loving profanities projected from my fishing partner. Two casts later I had another fish of similar size, but it got off. Then we fished for an hour and a half and caught nothing. At this point I measured the water temp and saw it was much too warm to fish at 72ºF.


We broke for lunch at the park in Coon Valley and saw they were having some sort of rubber duck race. These were strange lands we've entered.

Later that afternoon we arrived at Rullands Creek, further up the Coon Creek system. The stream temps here were in the 60s. There were in fact numerous feeder springs around the stream. I measured one and it fogged up the thermometer which read in the mid 50s.  I should have sat in it for a while.

The area we went to was a cow pasture area. Nicely manicured and fenced. Some of the fencing was electric. Or so I should have known before I decided that the nicely barbless barb wire needed to be pushed down to allow passage. Zap. But I wasn't finished torturing for the day. I needed to try the bridge one more on a return trip from the car to deposit some keeper trout. Strike! Miss.. fly in the wire behind me. Maybe I can flip it off? Just flick it and unwrap it... ZAAAP! (involuntary scream) This time, standing in the creek, it felt a little more aggressive, like a bowling ball dropped on my spine. I tore the fly off and trembled away.

We caught several fish between the two of us, all browns and some in a fun 12 - 14 inch range. I had spent the majority of the day using a size 16 Adams and it seemed to work great. 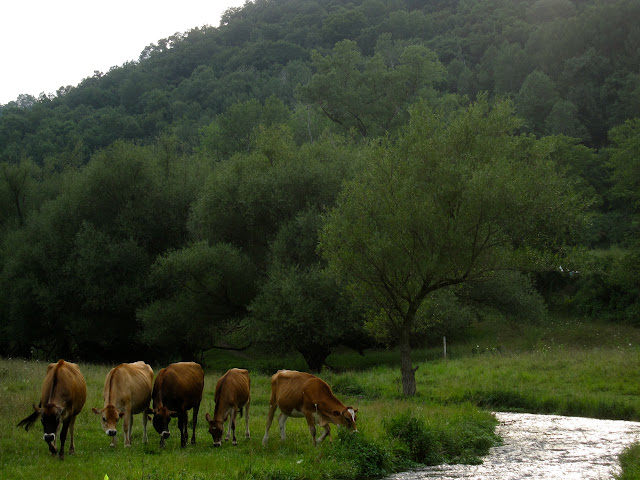 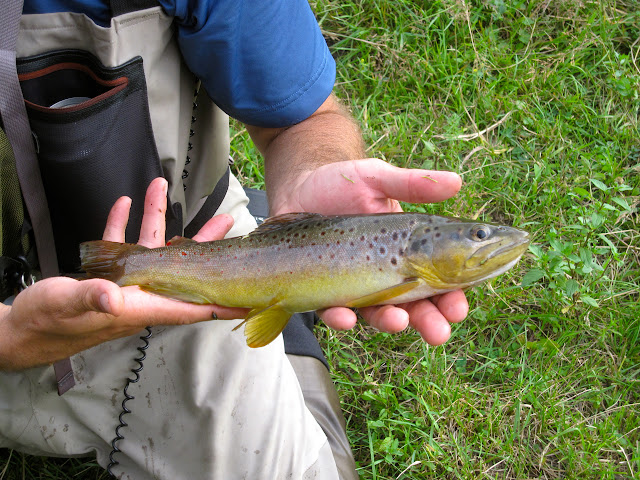