Then Came The Rain

I was pretty excited about my first visit to the fabled Rush River. The forecast called for 20% chance of scattered thunderstorms. Easy, it might rain some. Woke up at my campsite on the river at the Ellsworth Rod & Gun Club and tried a lower section of the river. It started raining almost as soon as I got into the river. I persevered  for over 2 hours in this, tripping on underwater boulders hidden in the Yoohoo colored water and making casts into likely holds with both dry and wet flies. No good. I returned to my car to change shirts and get on something that was actually waterproof.

Of course the rain never really picked up again after I changed into my spacesuit looking, puffy Frog Toggs rain jacket. I tried 2 different new spots on the Rush but never caught more that a couple small brook trout. If there was a way to catch fish in the aftermath of the storm, I had yet to learn it.

I really wanted the Rush to work out. I could see the potential. It is also one helluva beautiful stream.


Nearby Cave Creek, was clearer. It is also very scenic with huge bolders splitting the stream in places and a very cave-like feel, due to the forested, private land that borders the stream along its entirety. I got there late in the day and witnessed an eerie fog roll in and amongst the boulders and riffles. It begs further exploration. Fish-wise, again, I was limited to two small brook trout.


I spent another night at the rod and gun club, falling asleep listening to the occasional plop of a trout or the beaver working on beaver stuff. I had tried the night before to make a few casts from the camping area. This ended quickly with the beaver slapping his tail about 20 feet away from me. It was loud and it scared me.

The next morning, I decided to give the Rush another shot, but quickly learned that it was still in bad shape. I also wanted to try the Cave again, but someone was there and I don't like sharing caves.

It was suddenly clear what I needed to do. I must save my ego and go to a creek that has recently provided me with an ego boost... Rullands Creek!

And save my precious ego it did. Two and a half hours later I was back on familiar waters and catching fish in crystal clear, 60ºF water. Nothing extraordinary in the few hours I indulged in this creek, but about a half dozen fish to hand, some 13-14 inches and several strikes and lost fish. 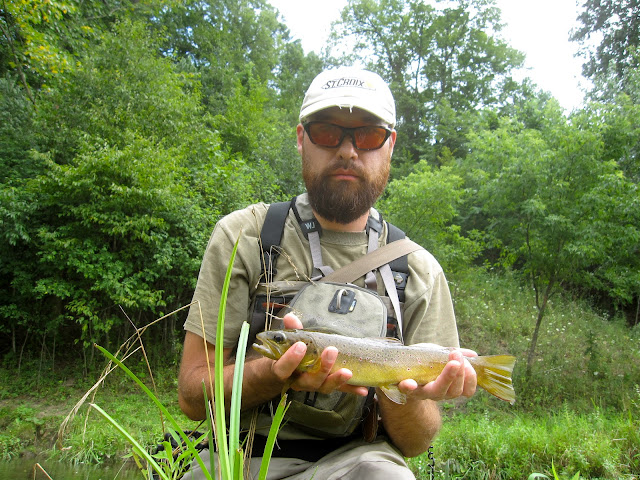 Among those caught were 2 brook trout, much larger than the ones from Rush. The fish responded to Adams and hopper dry flies from size 14 to 10. In some parts of the creek, I was able to crouch or kneel (loooove that cold water!) and watch 3-4 fish swim up to and inspect my fly before the brave or dumb one struck it.

While at Rullands, I tried a 13 ft 4x "spring creek" tapered leader by Umpqua for the first time. I had trouble at first getting it to turn over instead of fluttering down in a random pile somewhere near my fly line. After I got the hang of it though, and it seemed to spook less fish. I made a mess of it a couple of times though and hand to cut sections of it off.

Confidence restored, I went home and enjoyed some of my kept fish with coleslaw and chips. Cooked one with sprigs of rosemary. Excellent.