Despite a night of little sleep and shouting at perceived rodents scurrying along the outer sides of my tent, I felt unexpectedly refreshed in the morning. While impatiently waiting for the warm sun to appear, I bundled up and tried to spot any large wildlife that might be in the area. I returned without seeing anything and got started trying to catch my breakfast.

North Derby Creek was close enough to be very loud at my campsite. I hiked to the creek and quickly started catching many trout using a #14 "Craig's Caddis". Most were very small brook trout.


But there'd occasionally be a 10-12" fish. Cutthroats would appear about every 8th fish and most were exceptionally small, accept for one 10 incher.

That fish, along with 3 others were taken to camp for food. In an effort to conserve foil, I wrapped all 4 fish into one piece of foil. Don't do this. They didn't cook evenly and needed a new fire to finish the mushy poached mess.

I decided that I would stay another night in this area feeling that a full recuperation was in order. After eating, I hiked to a small lake that was just up the hill from me called Road Lake. It appeared shallow and fish-less, likely freezing to the bottom in winter.

I returned to camp and geared up for a day of fishing my way up Derby Creek. Other than a few red ants that snuck into my untucked shirt during a Clif Bar break, it was a blast. By early afternoon I estimate around 50 fish to hand.

By 3pm I wanted a break and some food so I returned to camp, finding an abandoned bungie cord along the way. At camp I devoured a package of rehydrated curry, supposedly a meal for 2, and rested on my back while reading for a bit.

After a while, it was time to fish again. I wanted to cook a trout and have it turn out right. The singular mission to retrieve a trout became two more hours of fishing, catching many fish and exploring new parts of the creek. At one point, the illusion of wilderness was crushed by a noisy family complete with dogs and a child. They disappeared over the hill and I settled back into my adventure. It was getting dark and a fish for the foil still needed to be caught. I returned to a good hole from earlier in the day and caught an 11" brook trout. It was densely covered in spots and had a mouth that came to a point. I started a good sized twig fire and created a liberal amount of coals that easily cooked the fish. I tore open some tiny salt and pepper packets obtained from a fast food place in Omaha and enjoyed my fish.

That night I wore all of my clothes at once to try and combat the night's chill.

I awoke in the predawn from the best sleep so far and decided that wearing all my clothes simultaneously was the way to go at night. After the sun started to warm things, I broke camp and assembled my pack in a way that seemed more balanced than before, moving the sleeping pad to the outside by using the bungie cord I found the day before.

My goal was to make it to another juncture in the trail. There would be good fishing and camping there. The map showed only moderate elevation changes but the hike started with a formidable hill. Sweat quickly covered me under the hot sun with only an occasional breeze or cloud.

Thirty minutes into the hike the trail leveled off and revealed epic vistas to the south of distant mountain ranges and nearby cliffs. 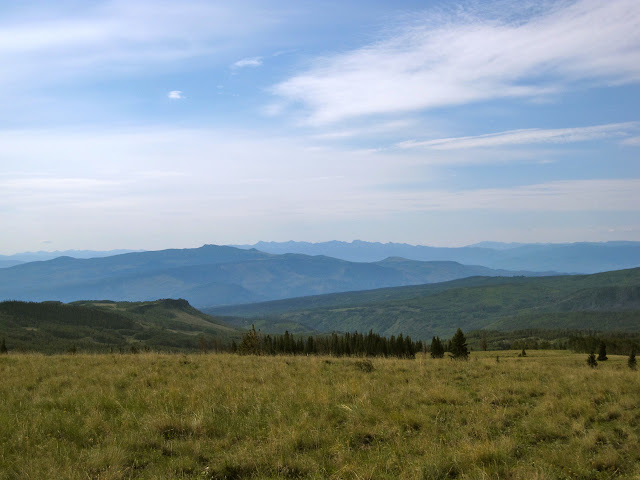 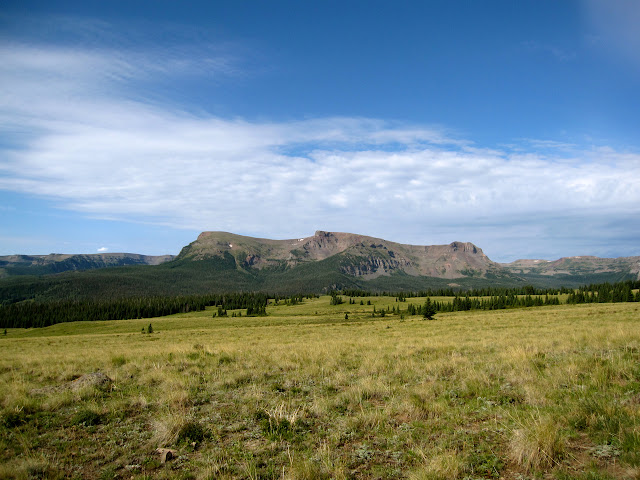 In order to get hints of my progress, I watched for landmarks such as creek crossings and lakes. But there seemed to be some conflicts with what I saw and what was on the map causing me at times to wonder if I had gotten on the wrong path. The path itself, usually a narrow rut, would sometimes disappear then reappear in different places.
Further along, the trail dipped in elevation and entered a forest. I directed my iPod to disc 2 of Aphex Twin's Selected Ambient Works II which matched the environment perfectly.

Eventually I found an area on the trail which matched the map and rested on a conveniently shaped rock. It was an area on a little creek down stream  from a lake named Mirror Lake. The lake though, looked more like a series of ponds. No fish made their presence known in either the ponds or creek.

After some rest I started back down the trail which inched closer to a valley that paralleled my trajectory by this point. The valley hosted the trail with which my trail would connect, and that would be the area for my next camp. With 3 hours of hiking behind me, I decided I was close enough if not exactly where I needed to be and found a place in the woods off trail to camp. I wasn't as destroyed as after my preceding hike, but still quite exhausted and sore.

The tent went up slowly and I rested in it for a while. Needing water, I forced myself to get up and head down the valley with my pump filter. Back at camp I ate one of my 2 remaining dehydrated dinners and found new energy to fish in the valley's creek.

The scenery was unforgettable. The creek twisted and turned, cutting a winding path though the tall undulating grasses on its banks.

I started downstream from my campsite but hiked back upstream when I noticed a group of horseback riders setting up camp across the valley from me. Further upstream, the creek's route was heavily modified by beavers. The water raced through underground tunnels flowing in and out of the main stream.

I counted 17 fish in 2 hours. Now I wanted a few fish for dinner but needed to return to camp and retrieve my creel and knife. By the time I got back down to the creek, dark clouds were appearing over the valley and thunder could now be heard. The thunder sounded terrifying once it got loud, echoing off the cliffs and mountains surrounding me.

I quickly caught and cleaned a few fish and headed back to camp with drops starting to land on me. I already had twigs gathered for the fire but was horrified to discover I'd left my knife by the stream. I remembered where I was with it last and quickly found it. Losing the knife would have been a disaster. The rain was picking up more now but I still managed a fire with one of my homemade fire starters. It took blowing into the fire to keep it going and the coals needed to be babysat during cooking as well. The fish turned out well and I at them in my tent as rain put out my fire.

The weather cleared up during the last hour of daylight and I went on a stroll around the area. Wisps of clouds clung to the valley's sides and the surrounding mountains. As the sun set, a pink light turned some of the clouds into pink cotton candy. No large wildlife was spotted.