I woke up to my 4th day in the Flat Tops in the middle of the night freezing. This would be the norm most nights especially with a leaky sleeping pad. When the sky began to show light, I hiked into the valley to try and find a place to stand in the sunlight as soon as it became available. In a desperate move last night, I tried to wear some damp clothing, bad idea. Now I needed the sun.

Recharged, I returned to camp and got ready to fish. Upstream from my campsite in the valley below, the stream had undergone major modification by beavers. Inter-connecting tunnels re-routed the crystal clear water underground from one bend to the next, leaving portions of the stream oddly dry. In some cases, the tunnels seemed to have caved in leaving a series of holes in the ground with water rushing by, like looking into windows running the length of a pipe.

After catching 17 fish on a small caddis fly, I retrieved my creel from camp and caught 3 more small trout for lunch. It was too wet to start a fire so I opted to cook them in a small pan using my stove.

After eating it was time to move on. I could still turn around and start the shorter journey back to my car, or I could press on to Island Lake, a high elevation lake fabled to hold large cutthroat trout but also putting me at the furthest possible distance from my car and committing myself to the full loop as described by the blog that spawned this entire trip. Feeling relatively spry in the the afternoon sun with a belly full of trout, I decided I needed to see this lake.
I took my time breaking down camp and repacking my pack. According to my topo map, I would need to ascend 750 feet in a short distance. I found my way back to the main trail and started up the rocky path trying to avoid softball sized rocks that would send down baby, cradle and all. Squarepusher's Ufabulum was on the headphones now. As expected, it was a tough hike and I needed a couple of breaks on the way up, sitting on stumps. It took about an hour and a half, but I finally saw the lake. I followed an off-shoot trail that lead to the lake. At the end of the path was a campsite with a stone fire pit and log "benches". Before me was a calm lake surrounded by mountainous cliffs and pines, the beauty of the scenery hit me very hard. I walked up to the lake just in time to see a large cutthroat flash it's rosy cheek at me as it took a bug from the surface. The effort had been worth it!

I stripped off my pack and assembled my 7wt St. Croix rod as quickly as possible. After some sloppy mishaps that I'll blame on my excitement, I had a fish on. It rose to a #14 PMX that I casted from shore to some distant but visible submerged boulders. The fly disappeared into a solid clop and the fish ran left and right mostly, never jumping. Most of the fights on this lake would be completely submerged. I watched the fish thrash its head back in forth when most of my line was reeled and then netted him. A 13" cutthroat. I held the fish and ran over to a small tripod and camera to get a picture Took two shots that were zoomed too far in before releasing him.

With confidence, I gathered some firewood with which to cook trout. I just did a big hike and needed more food. Casting to the same place I found the first fish, I quickly caught a 13" cutbow (a cutthroat, rainbow hybrid). Then, several casts later to the same area, I caught a plump 15 incher that exploded the surface of the water after taking the fly. The fish were salted and peppered then wrapped in foil to cook over coals using a metal cooking grate that had been left in the campsite. The fish turned out fine, but it was a lot of fish that needed to be eaten at once, which I did of coarse. After finishing the last bit, I questioned whether I could handle eating anymore trout, ever.

Delirious with success and trout, I rested in my tent for a while before heading down the shore a little ways to fish some more, though not catching anything. I saw fish rising, but they seemed like tiny fish. I went back into my tent and simply stared at the lake and the cliffs for a while. It was dead quiet. The air was completely still. Aside from an infrequent chirp from a bird or the occasional rapid fire chatter of a pine squirrel, it was an intense, heavy silence. My ears rang from the silence and I could hear trout rising out in the middle of the lake.

After a night of relatively decent sleep, I got up at first light and made myself some coffee and oatmeal before preparing to fish the south west corner of the lake. This is where the lake's outlet stream is located. I hiked along the shore to the other side of the lake. On the way, I found another established camping area. Near my destination, the lake became surrounded by cliffs that rose 100s of feet, skirted by boulder fields which housed colonies of pikas.

The outlet stream was barely a trickle, there would be no fishing in it. The area near the outlet was very shallow and marshy. I balanced on logs in order to keep my feet as dry as possible. Pods of small fish were making small blips on the water's surface. I waited and started to worry before I noticed 3 large trout cruising near the mouth of the outlet stream in very shallow water. I lifted my line off the water and made a couple of adjustment casts before landing my fly (a Craig's Caddis) in the path of one of the fish. It reacted immediately and broke from his group to sip down the fly. He thrashed around and shook his head. As I brought him in, I held the rod in one hand and took some photos with the left, confident of my connection with the fish. I maneuvered him to dry land and measured him at 14". I never found any more fish to cast to in this highly visible area, so I moved on, planning to fish all the way around the lake. 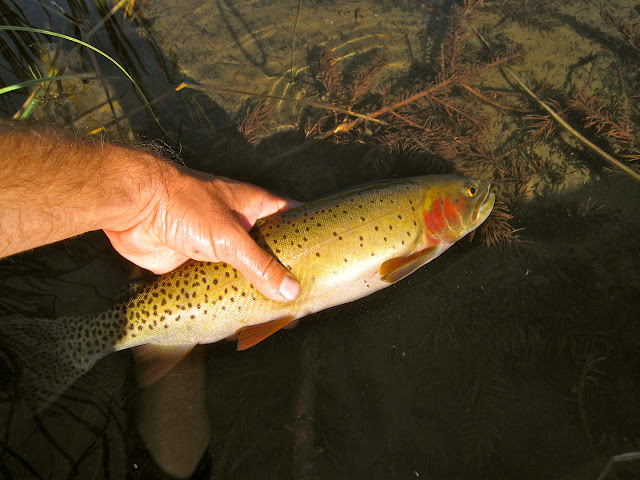 Working my way around the lake was a chore at times because of dense woods and rocky shore. I didn't see many fish and couldn't make many casts for a while. I took photos and admired what closely resembled a smurf village. I believe these fanciful looking mushrooms were Amanita Muscaria and yes, they are known to have hallucinogenic properties, though with side effects including seizures and coma. Oddly, some of them were clearly nibbled on. I thought of the spastic pine squirrels.

Besides getting a few fish to briefly follow a leech pattern, I didn't start catching fish again until I arrived at the south east corner of the lake and switched back to a dry fly. Here, logs had piled up in the corner of the lake. Many floating, some sinking and some on the bottom. If I balanced my way out to the 3rd or 4th row so I could cast to a good number of locations. I don't remember how I came to find the first fish, but he was about 14" long and became my stream side brunch.

I proceeded to catch 3 more fish in this area ranging in size from 13 to 15 inches. I was sight casting and it was a blast to watch the fish react to the fly. At one point, I even got to choose the biggest fish from a pod. 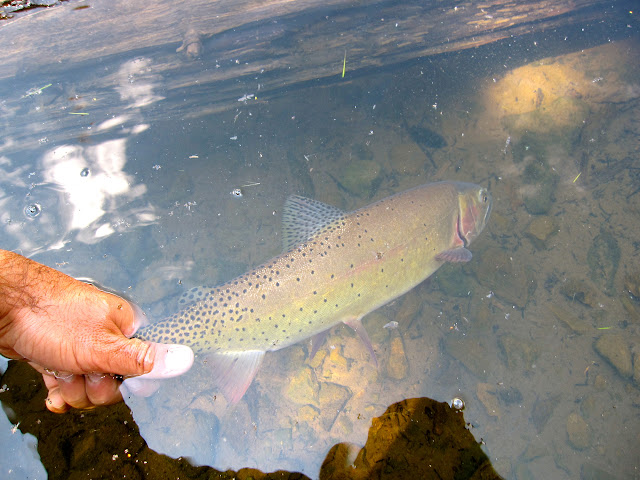 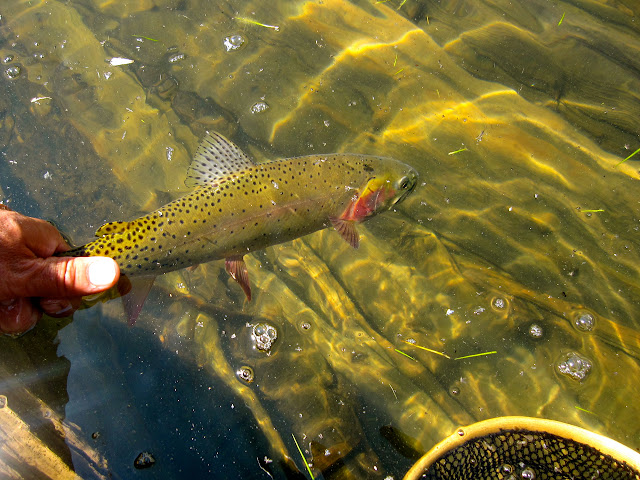 After the 3rd fish, I headed back to camp. I ran out of water and forgot to bring my filter. When I got back, I tried to rest for a bit. It was noon and the sun was blazing. Sitting in the shade of a short pine with my back to the lake, I heard some splashing and couldn't resist catching one more fish before really taking a break.
After reading for a couple of hours I entered the mid-afternoon malaise I'd experienced most days here from just being exhausted but wanting to do everything. I solved this problem by fishing some more. A fish I caught for dinner happened to rise in a spot I just stepped through, wet wading along the shore. I simply twisted around 180º and casted about 10 feet and caught him. The fish up here do seem a bit naive.

After eating, I continued to fish into the evening without much luck. Caught only a stunted looking fish that hooked itself. Back at camp I sat at the edge of the lake and stared into the scenery until it got dark. Stepping outside the tent that night, I looked up at the sky. The brightness of the stars illuminated the landscape without the presence of the moon. I kept staring at the sky until my neck got sore counting 2 satellites and 4 shooting stars.