Defecting To The Iowan Driftless

If you're a Wisconsin resident, the inland trout season is over. Maybe you're reading blogs or looking back at pictures from last season. Or maybe you're just trying to drink the sorrow away. Put the bottle and gun down. There are options. Devil's Lake State Park for instance has nearly year-round trout fishing.

However, if lake fishing ain't your bag, spring creeks amongst the coulees can be had just one state to the west, in Iowa.  The IDNR website has some decent mapping tools though I picked up a great printed map at the General Store in Highlandville.

I've had an Iowa license and trout stamp since last winter, so I went over there the weekend following the end of our season. I wasn't the only one who'd thought of this so when I got to Bloody Run Creek, across the Mississippi from Prairie Du Chien (or "PDC", as it's known to the locals), there was company waiting for me. Even though it was busy, hiking a good ways upstream into an artificial only section granted me solitude and fun fishing. Most of the action that day was courtesy of size 8 woolly buggers which reeled in a handful of rainbows and browns. 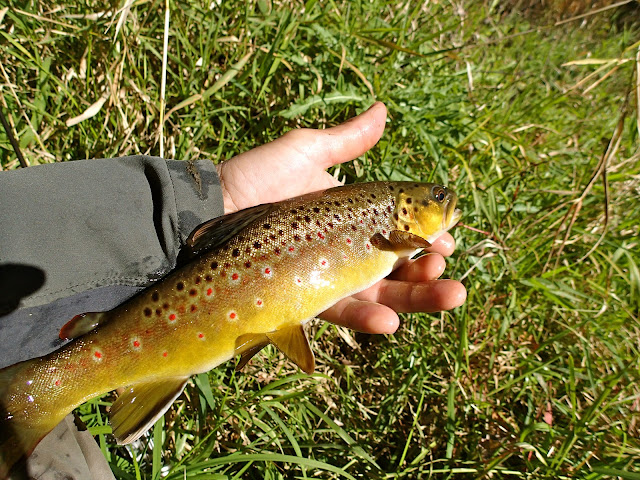 There were a lot of wide slow areas in the creek which held lots of trout but were difficult to fish due to the lack of stealth I could achieve. I only made it about half way through this section of the stream and will probably explore from the point I left off the next time I go.

The following weekend I didn't fish. But the 3rd weekend of October, I fished with a vengeance, this time joined by fellow trout addict and veteran driftless angler, Trapper and his friend Jake. The two of them would join me for Saturday, but I arrived in Iowa on Friday, securing 2 nights a the Sportmen's Inn near Dorchester. The inn is a fantastic place to stay if you're fishing in the area with beyond reasonable rates and a restaurant that opens at 6 AM. The walls of my room were adorned with kitschy fishing art and the cell phone signal was non-existant. Sound like heaven? I thought so.

I awoke at the silly hour of 5 AM. Silly, because it wouldn't be light out until at least 7, but I was looking forward to my Sportsmen's Inn breakfast. I walked over to the restaurant part of the inn at 6:05 and sure enough, the owner was standing behind the bar watching the news on TV. I was the only one there but was served a meticulously prepared breakfast just the same.

Trapper, Jake and I got on the water at Waterloo Creek at around 9 and it was still pretty cold and foggy. The trout were there but uncooperative. It was at this point that Trapper introduced us to the Bear Creek system where we found trout that were receptive to light colored size 16 mayflies and of coarse 'buggers. The flying insects became more prevalent as soon as it started getting warmer and sunnier.

Before starting on Bear, we stopped at the General Store in Highlandville for lunch and some tackle. They had a functional selection of fly fishing stuff from which I would purchase leaders and flies before the end of the weekend.

Before dark, Trapper and Jake parted ways with me and I continued to fish until it got dark, catching a few more rainbows on an Adams fly.

I returned to the car, which was now alone in a parking area that had about 5 vehicles in it when we arrived. Back at the inn, the owner directed me to a place called "Wings" in adorable Dorchester for dinner. The food was classic supper club fare and I was scolded when trying to leave a $5 tip. "Around here that's utterly insane!", exclaimed the bartender/Wheel of Fortune aficionado.

I slept in a little the next morning. The bite is slow on these colder mornings. This time, the restaurant was full of patrons by the time I got there.

With my waders on and everything in the car, I set the GPS to take me back to South Bear Creek. I parked in an area downstream from the convergence of North and South Bear, then walked down the gravel road to an access area even further downstream that I saw while driving in, but didn't want to risk getting my car stuck in the mud. The path led to a very large pool, the one pictured at the beginning of this post. It looked very deep but with only an occasional trout rising lazily to something. I made a few casts out into the calm water with a woolly bugger, but no luck. I then moved to the inlet of the pool and caught a feisty rainbow, eliminating the fear of getting skunked early. So far so good.

I worked my way up stream catching a couple of small brown trout before heading back to the car. Hmm, that's two species of trout early in the day. I haven't caught all 3 species in one day yet, I thought. Before my next stop, I wanted to go back to the General Store to get some pale morning duns, in case those white mayflies show up again. Using a map from the store, I found my way to 3 of the 4 parking areas along North Bear Creek. I started fishing at the 3rd one, the one that had no cars. I'm pretty sure I was in a designated parking spot, though I had my doubts when a farmer narrowly squeezed by my car with his large noisy corn harvesting machine. After missing some strikes by the bridge I decided to hike a ways upstream to get away from the noisy farm equipment.

Getting it in your mind that you need to "hike way upstream and get away from it all" can be a challenging endeavor. Not the hiking part, but the not stopping part, especially on new water. Occasionally I would be close enough to the stream bank to take a peak and of coarse see dozens of trout scrambling for cover. Must. Press. On. Noisy farm equipment behind me. Imagined trout oasis ahead! 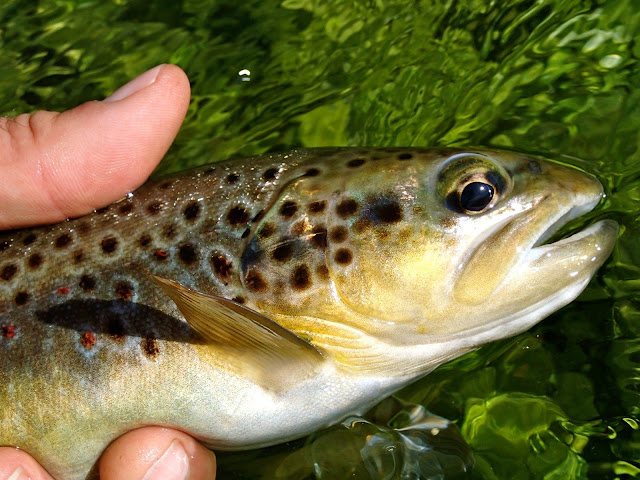 When I finally did begin to fish, I caught a nice plump brown casting to an area that I only suspecting to be holding fish. I must be learning some things. I lost the #16 Adams that caught that fish soon enough and switched to the PMDs. While sitting on a clump of grass protruding out of the stream near an eroding bank to tie on a new fly and savor a Coors, a trout started rising about 8 feet from me across the stream. "You little smart ass", I thought. Without standing up, I lobbed my fly over to it's suspected feeding lane and quickly had a fish on. A 12 inch brook trout. I did it! All three species in one day for the first time! Trout Trifecta! 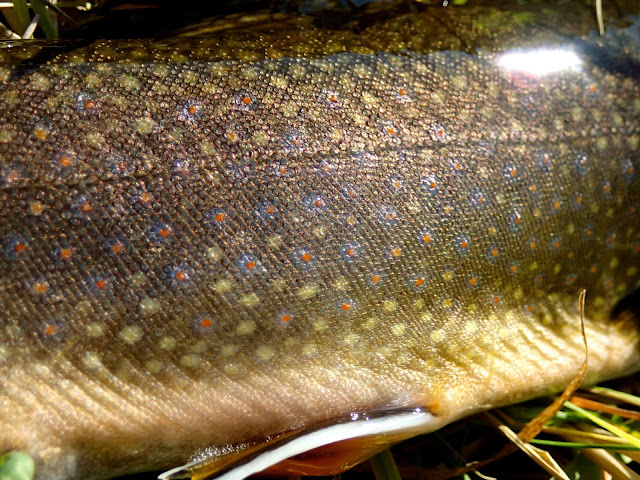 I moved upstream and passed up a shallow weedy looking section that seemed pointless to cast to. I walked up to the bank to check it out, not worrying about spooking anyone because its just a crappy shallow area, right? Wrong. I'm prone to overestimate the size of fish that are in the water. But I swear I saw a 2 foot fish slithering between the narrow lanes of water between the weeds. Damn.

I caught or lost a couple more fish on the way upstream before it got too dark. The Bear Creek system in Iowa seems like an awesome fishery so far. I plan on returning and I thank Trapper for showing me around over there. Meeting and learning from other anglers is invaluable and fun, even for us anti-social types.

And by the way, if you want to see the potential waiting in Iowa from someone who clearly surpasses my abilities on the water, check this out.
Posted by Dan B at 7:47 AM