The 2012 season has just ended. My first full season of fly fishing for trout in the Driftless Area. I started around May of '11, dunking worms with spinning gear and slowing being introduced to this beautiful area by friends. I think the first trout I pulled out of the Driftless was from a canoe on the Kickapoo River with my friend Mike, a couple of years before that.

In June of '11, I purchased a fly rod and waders. On June 4th, I caught my first trout on a fly (a 10" brown trout from Camp Creek on a prince nymph). Fishing with the fly amplified my interest in fishing tenfold. Eventually, 2nd and 3rd rods were acquired, waders were replaced. Money got dumped into flies, leaders and all of the other gadgets and bobbles that would get stuffed into my chest pack, lost, broken and wedged into the crevices of my car.


My obsession snowballed such that by the time the 2012 season rolled around, I was as excited as a kid with a Nintendo 64 to start fishing again. Unlike in the past, the catch and release season would be enjoyed even without eating delicious trout. I managed to get out almost every weekend this season and often 2 to 3 times a week. Being only my second season, its not surprising that I broke many of my personal records. The most fish caught (didn't count but I'm sure of it), the biggest fish caught (19"), first tiger trout and the most time spent on the water. I fished several new streams this year but continue to feel overwhelmed by the many miles of streams and sections of streams left untouched. This is a good thing. There are streams I found last season that were excellent, but not returned to simply because I was too busy with closer streams. It's amazing to me that I've lived as long as I've had on the border of the Driftless Area but only just started exploring it within the last two years!


Enough of my short trout fishing history... Two weekends ago, with advice from a friend, I tried fishing the south fork of the Bad Axe river. I arrived around 10 AM and fished upstream from the bridge at Duck Egg County Park. This area is purported to be a popular area. While there were a couple of cars there, I saw no other fishermen. A few horse trailers pulled in before I left. There is access to horse trails here and around the area. 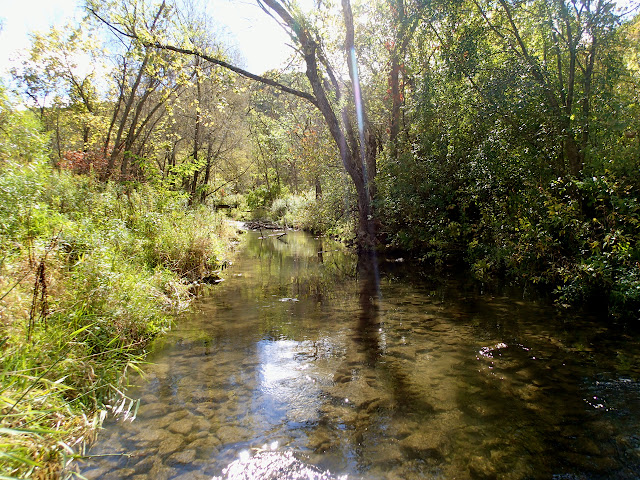 The fall colors were really starting to pop already and the scenery around the creek was gorgeous, due in part to the perfect sunny weather. Sunny doesn't help catch fish, but I caught enough to be plenty amused for my few hours there. The creek had a few good deep holes without moving very far upstream, one of which yielded my second largest trout to date, an 18" female brown trout. This was done using a #14 black woolly bugger and strike indicator set about 6' back. The cast landed across a deep green pool bordered to the right by weeds floating on the water, creating a shady trout home.


Wanting to hit another area before the day was up, I headed back to the car around 1:00 and drove to Viroqua for lunch at the CO-OP. I would just stand there eating directly out of their buffet if they'd let me.

Next, I plotted a course to a bridge near the confluence of Hornby and Bad Axe. It was on highway N with a deep looking hole on the downstream side of the bridge. I tried to fish it but caught nothing.

I crossed the bridge and started my way up the Bad Axe towards the confluence. Aside from a hole immediately upstream from the bridge filled with dozens of easily visible skittish trout, much of the water was shallow though I would see the occasional spooked trout, none large. I fished where I could make a cast but didn't manage to catch anything until a couple of bends after the confluence. In this part of the Bad Axe, there is a large pool headed by a pair of riffles. It was at this point I started catching browns ranging from 8 to 12 inches. About a half dozen to hand before it started getting too dark.

Using the magic of the internet, I will now skip the entire work week to the next weekend.

The final weekend. It was challenging to schedule in the amount of fishing I wanted to do as I also had 2 shows to play. Friday night in Madison and Saturday night in La Crosse. I usually get free beer at shows so it wasn't just a matter of time but resisting the urge to party past the point of having a "friendly morning". Saturday morning could had been better, but I successfully retrieved Brown Beard by 8:30. We had our sights on Hornby Creek, part of the Bad Axe system. 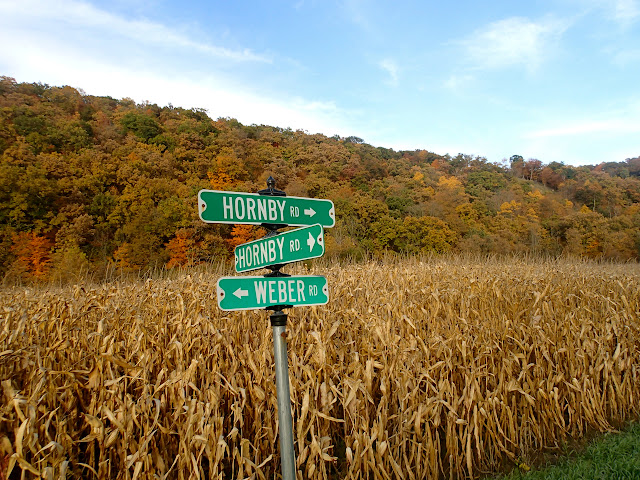 We found the public parking area on Hornby Road, a primitive gravel road buttressed by uniformly sized, autumn colored bluffs that appeared to have been carefully dripped into place by a giant pastry bag. Two trucks and a tractor overgrown with weeds already occupied this space, though we only suspected the trucks as belonging to fishermen. We spotted one group of people headed down stream so we went upstream, and never saw another angler. Fishing started off slow in the sunny mid-day light. Brown finally broke the silence and reeled in a 10" brown. I followed that with a 13 incher and we proceeded to catch about a dozen fish together by the time we left, including a 16" female. The creek, though shallow near where we started, contained a good number of under cut banks, bends and pools. Of special note, I caught my first fish on a fly I had tied. A basic woolly bugger pattern. 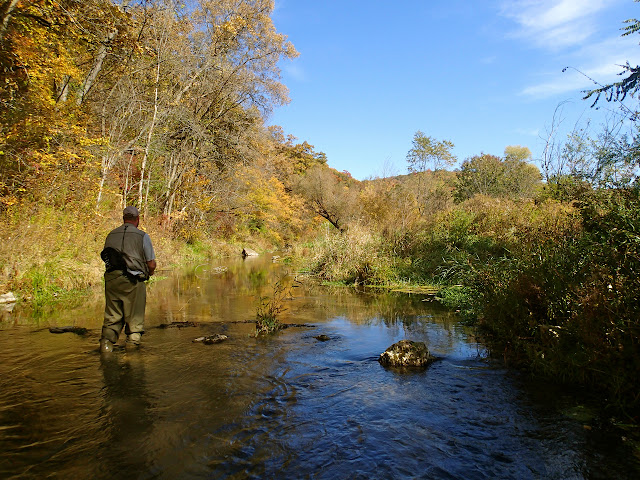 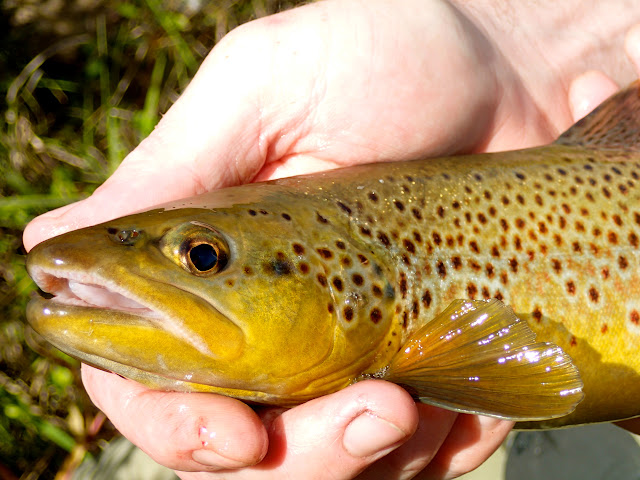 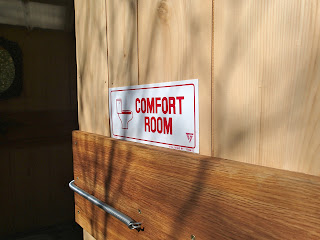 I had to play a show in La Crosse that night, so we needed to find a campsite by mid-afternoon. Originally we had planned on again staying in Esofea, but happend to pass a modest looking campground not far from where we were. A wooden sign read "Countryside Campground" and beyond it was an immaculate green lawn accented by tastefully placed clusters of fountain grass, lawn ornaments, fire rings and trees.

The owner happened to be mowing while we were there, an older gentleman named Henry. He happily broke from his lawn care and offered to show us around the entire property, one site at a time. Four big sites, with water and electric. Each were furnished with new picnic tables, professionally assembled fire pits, and a smattering of sculptures and bird feeders. A tree line bordered the west side of the property with a bubbling section of the Bad Axe river on the east end.

Henry made a point to show us his augmented porta-potty that his wife was especially proud of. The "front yard" of the outhouse was adorned with a few lawn ornaments, brick entry way and solar powered lawn light. Without even looking inside it seem to say: "someone cares about me." He opened the door and pointed to a sign that read "comfort room". It was comfortable. Pretty things hung from the walls and deodorizers populated the shelfs. The walls had wooden siding, periodicals were provided and hand sanitizer was available. This was a mom's bathroom and it was wonderful.

A site costs $20, 4 more bucks than Esofea, but we had a premium camping paradise that included free firewood. The only thing missing was beer which was easily attainable from around the bluff about 10 minutes away at a bar and grill called Norwegian Hollow Hideaway. This was a nice new looking establishment overlooking Norwegian Hollow Creek, a brook trout stream I'm told. I was only there to buy a case of beer, but intend on returning to enjoy the view of the creek next season.

With only an hour to spare, I ate some trout and drank some beer, lounging in the afternoon sun on my camp chair. It was heavenly, in fact. And I recall it being a real bummer to leave. As planned, we finished the show around midnight and I made it safely back to the campground with enough energy to enjoy some of Brown Beard's culinary mastery and a couple of more beers. Brown warned that he was not game for getting up in the early morning and I agreed.

When I woke, it was cold and the sun was peaking over the bluff. I ambled around the site taking some photos and casting my line a few times into the nearby creek, catching only a couple of rough fish. I returned to my tent until we were both awake, sometime around noon. Again, Brown Beard would prove his cooking prowess and make a breakfast that, while unconventional, alleviated any trace of a hangover and provided the energy of a dozen nuclear power plants. It was basically biscuits and gravy with "sausage" only, the sausage were brats and added to this mix were pierogies. Pierogies are essentially starch wrapped in starch fried in oil. Delectable.

We saw so many fish in Hornby Creek the day before that we decided to simply return to where we were yesterday and fish up to the bridge. Again, the numbers weren't especially high nor the fish particularly large. But, the weather was unbelievably comfortable and the autumn colors were unforgettable. 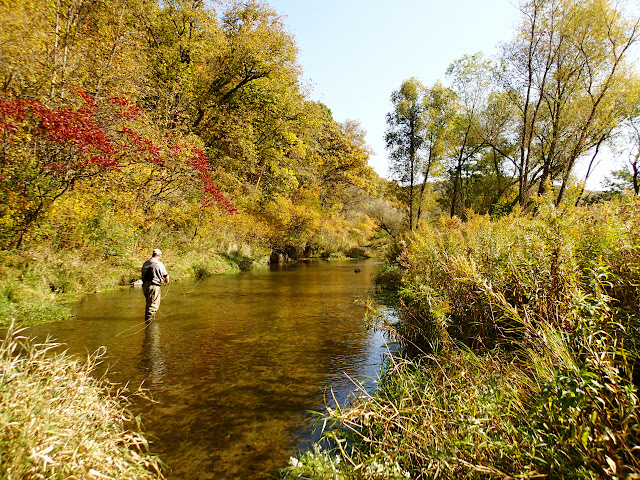 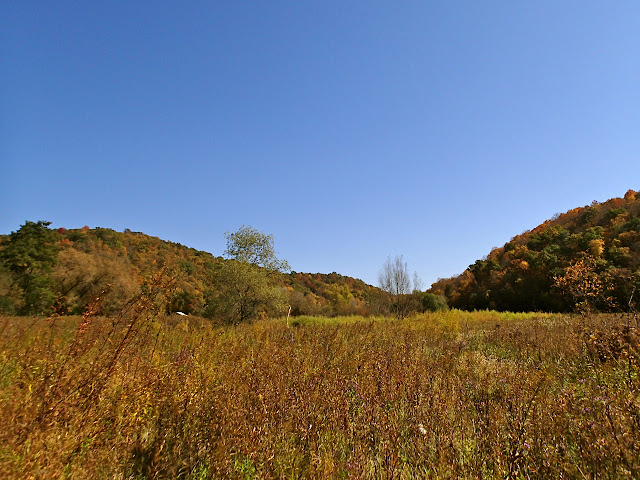 So does this blog die now for 5 months? I've got to finish the Colorado series yet. I'll be headed to Iowa, possibly next weekend. I have an annual license. There's also a chance for lake run trout and salmon. Other species of fish might make an appearance as well. Ice fishing? I doubt it.
Posted by Dan B at 7:23 AM