Pushing My Way Through The Winter Season

I've stopped asking myself why I subject my digits to being wet and frozen this time of the year. Amidst the icy eyelets, frozen reels and uncomfortable winter clothing, I've already had some special moments during this early season.

A couple of weekends ago, while fishing some brook trout water in central Richland County, I stumbled into some unusual animal tracks. In the snow, a trout fisherman will find all manner of deer, raccoon, possum, rabbit, sasquatch...just, all kinds of tracks. But these tracks gave me pause. I didn't want to immediately tell myself that these were wolf tracks like some nieve tourist, but I do believe now that this was the case. I've passed photos of them by a number of friends and folks who live in the area and are knowledgable about these things and they do indeed appear to be wolf tracks. 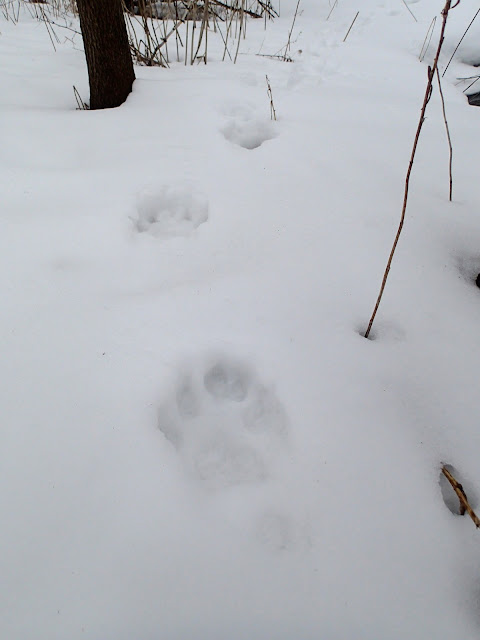 An interesting feature of these tracks (besides the frighteningly large size of them) are what appears to be a 5th toe. This is the result of a stalking behavior where a wolf will step in its own tracks in order to increase it's stealth, presumably as it approaches the hapless fisherman untangling his leader... I followed the tracks for a while, cautiously. They lead a straight path along the side of the creek, crossed to the other side and then headed for the direction of the woods and bluffs. I returned to my fishing.

The creek, though very shallow in some spots, yielded 8 brook trout for me. They were all vibrant and healthy fighters. On a grave note however, they all carried gill lice, especially the smaller ones. I reported this to the DNR using their website set up for this purpose.

The following Sunday I would be reunited with Brown Beard, a frequent fishing partner. His work keeps him form having the same days off as me, so this is only the first time I'd been out with him this season. It was slow going in the morning. The evening of wolf-tracks-Saturday involved some adult beverages and 'Beard works nights, so we didn't arrive to our destination until about 11 AM. The weather was just miserable. Cold, rainy and windy. With the temperature just above freezing, there was also snow melting into the creeks. This, in addition to the precipitation, raised the level of the creeks, making them turbid. We stopped at a few creeks before arriving at Mill Creek, a large system that I am and continue to be unfamiliar with. We each caught 1 fish and called it a day. 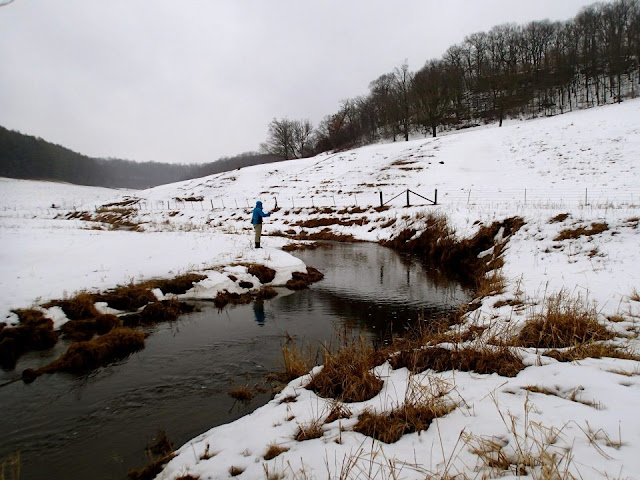 Earlier this year, the WDNR released the Regional and Property Analysis: Driftless Area Trout and Smallmouth Bass Stream Master Plan Project. Contained within these documents are reports, analysis and some history regarding the watersheds contained by the driftless area of Wisconsin. I'm particularly interested in the information regarding my neck of the woods in Sauk County and its these studies that would be the genesis for a couple of "trout scouting missions". I would be very pleased to be able to drive less than an hour to some modest trout waters.

My hopes were of coarse tempered by my previous disappointing visits to marginal, nearby water, and this would not be an exception. Maybe sometime in the future, things will change. One also has to keep in mind that these DNR documents are more about conservation and habitat study, not "hot fishing spots for Dan!"

There's another small creek near me, a brook trout creek. Though modest in number and size, I have caught fish there, but not this time. Only a few glimpses of fish scurrying away under the dead brush. I'll still try this creek again though, while the grass is down.

I have a friend named Trapper who lives on the West Fork of the Kickapoo river in a town, if it can even be called that, named Avalanche. It was his birthday last weekend and he invited me up to fish with him. Fish with a man who has dozens of years of experience fishing in the Driftless? "Shit ya!"

He introduced me to his 2 labs, Sheila and Mama and we discussed the area. I learned a lot about the history of the area from him, especially the trout management. I chose the creek and he agreed. It was one of his favorite creeks, but the creek was not kind to us despite the fact that it looked amazing. Every fisherman on days like this says "well, I'm just glad to be out". I was a little less than positive about this cold, dreary day. Trapper on the other hand was in fact just glad to be out fishing.

Perhaps sensing my frustration, he shared a special area with me that is a bit of an anomaly. 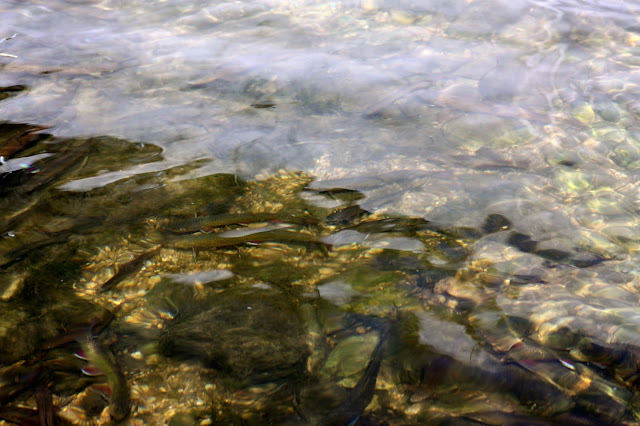 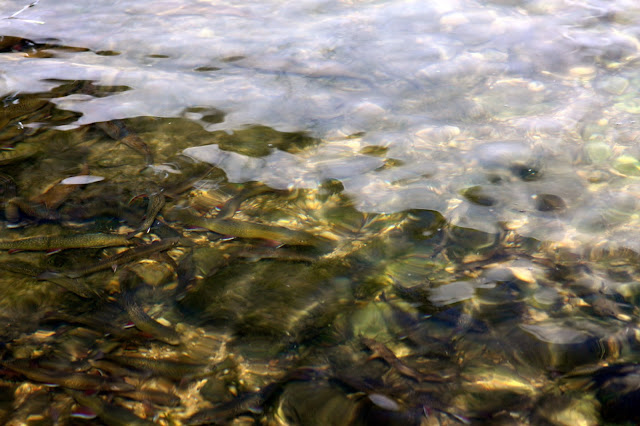 The above images are of brook trout. Maybe a hundred of them. They were on their way upstream until the changing water levels left them stranded in a small pool. Some looked close to 15 inches.

Tossing a pink squirrel while Trapper generously decided to just watch, I caught a few of them. The last one I had on thrashed violently out of the water and snapped my 4x leader. I casted again and snagged on a structure behind the pool. Game over. I believe I had on the biggest brook trout of my life.

After that, we decided to call it a day (ok, I greedily talked him into visiting the brookie place once more, only to be snagged almost immediately. Go figure). We ended the day at the Westby Rod and Gun Club drinking beers which I used to wash down a, um, large hamburger.

We got some beers to go which dictated that I needed to stay in Avalanche for the night. Thanks to Trapper's hospitality, I was able to wake up in Trout Central.

I woke up early thinking about breakfast, somehow. In particular, I was thinking about the buffet over at the Viroqua Co-op. I got there a bit early for the buffet at 7 A.M. An amazing homemade scone had to do. Compromises.

I tried to kill some time there before fishing again. It was 15ºF and that's supposed to be too cold for good fishing. I made it to about 8 and needed to go.

I navigated my way to a branch of the West Fork. It was cold, but very clear and the sun poured down into this valley which had an eastern exposure. I found a bit of DNR land to cross but needed to crawl under a tight barbed wire fence that required me to shed my chest pack and dig out some snow beneath me. On the other side, I marched towards a treed, snowy bluff at the base of which flowed my creek. 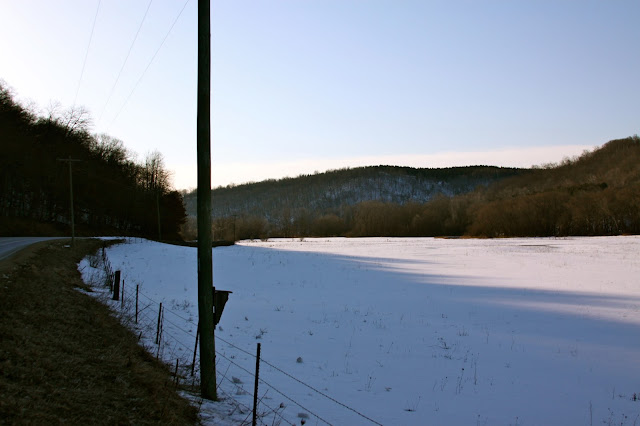 I arrived at a shallow featureless section of the creek, so I searched upstream and stopped at a long hole that was headed by a cascading riffle with a frigid wind blowing against my back. Twenty trout arrived at my net within the next hour from this single hole. This would be my first day catching over 20 trout in one outing, let alone from a single hole.

After twenty, I reeled in my line and tried to warm my fingers. I put my gloves back on, one of which had fallen into the creek and was now frozen hard.

Nearby, a certain pool of brook trout awaited me. Yes, I needed to try again. I wanted a photo of a nice one. I caught several before snagging, but not the big mama. 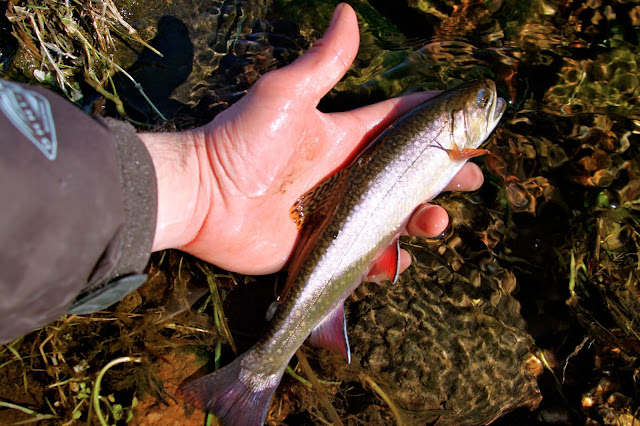 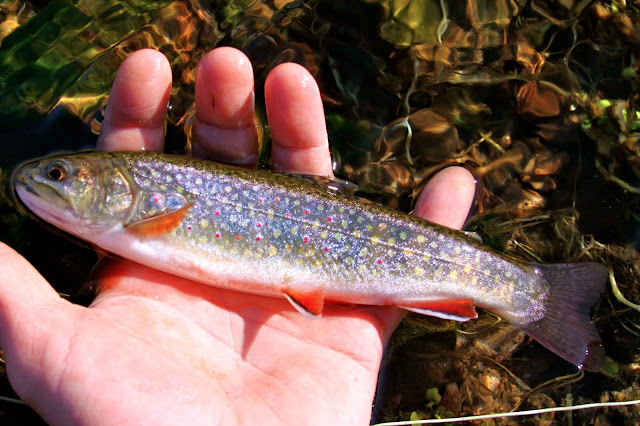 Feeling good about the amount of trout slime on my hands, I returned to Viroqua for lunch (I washed my hands). This time the buffet at the co-op was open. I then proceeded to The Driftless Angler fly shop with my broken reel. During my brookie rampage, the reel spool simply fell off and wouldn't snap back on. Probably something to do with the number times I had to break it free from ice. Anyway, they treated me very well there and had it working again in no time. Awesome.

The rest of the day I explored some marginal creeks close to home. I have nothing to report nor was I that disappointed. It had been an interesting winter season weekend.
Posted by Dan B at 8:02 PM