Cough! Hack! Sorry, this blog has collected a bit of dust since my last post about Iowa or wherever. But it's time to bring things back to life. The 2013 WI trout season has arrived!

Temps where in the mid to upper 20s this weekend, but the sun was bright and the wind was minimal. Given the slow bite this time of year, I chose to stick close to home and started on streams last saturday, the opener, that were in or near Sauk county.

My plan was to hit some deeper holes on the Melancthon, then head back towards home fishing the next valley over, Willow Creek and then the final valley, Bear Creek. But there would be no time for Bear. Melancthon also had to be removed form the mix. My target spots all had too much ice on them.

Fortunately, not too far away was the West Branch of Pine River. I went to an area I was familiar with and proceeded to catch a nice brown on my 5th cast of the new season!


I proceeded to fish upstream, stopping frequently to snap ice out of my eyelets and break the reel free from the same. However, the following hour would remain sadly fishless.

I packed up and headed over to Willow Creek, but not before stopping at the very awesome Natural Bridge Grocery store at Pier County Park in Rockbridge. The very sweet lady that runs the store introduced me to "Sysco", a rescued Jindo dog.  A fishing trip to this area is not complete to me without a stop at this store. 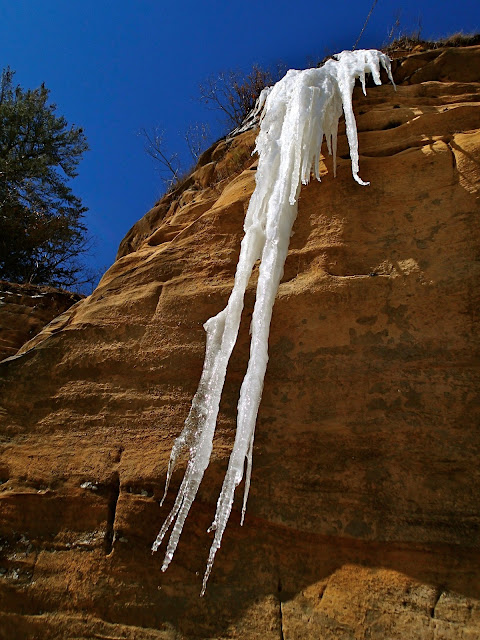 After about 20 minutes on the road, passing some giant icicles hanging from cliffs along the way, I pulled into Doolittle Road in the town of Loyd to find that very little is done on Doolittle road this time of year. The snow was not plowed all the way to the bridge, so I had to hoof it from my car. I continued to hoof it down stream to where I thought the improved sections of the stream began. Despite the temperatures being in the 20s, I was getting very warm in my multiple layers of clothing beneath 5 mil Cabelas neoprene waders. The field of snow took on a desert-like quality. Finally, I allowed myself to peer over a bank where I saw a couple of chubby trout hanging out in the shadows and I began to fish. 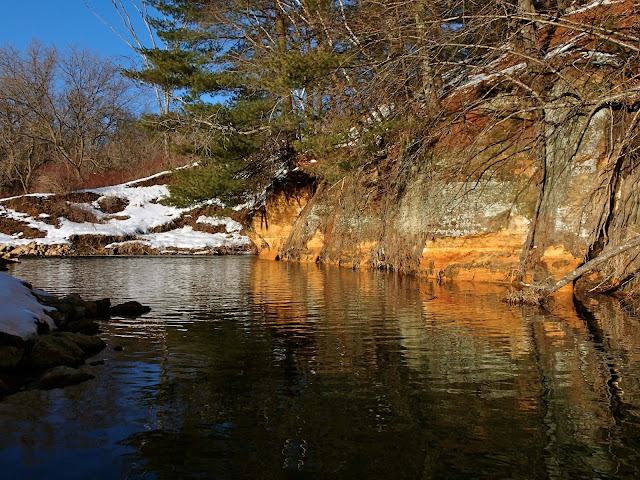 I didn't catch those fish. I would in fact only catch a couple of fish before finishing my first day of the season.

How heroic would it be to catch a monster fish out of some godforsaken hole that no one you knew ever suspected to hold one? This was my motivation to visit the "drain" pool of White Mound lake. The Honey Creek system into which it drains does after all hold trout, but when I approached this thing, I couldn't see how they would have been able to navigate to it, at least as it appeared now. The outlet to the pool was completely jammed with sticks. I casted and casted, looking around occasionally to make sure no one was looking and laughing.

I couldn't see the bottom of the pool, but all that appeared to be here now was brown water and broken dreams.

Bear Creek was in the vicinity and I had wanted to go there the day before, but ran out of time. The access I wanted was snowed in and I almost got stuck in the shoulder of the highway trying to park off the road. It was no use, I couldn't fish here. So, I drove downstream to a bridge access. 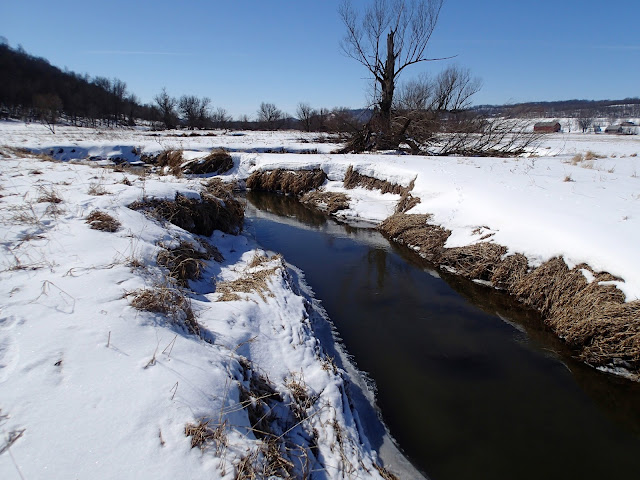 A large sign announces that you are in the presence of a trout stamp funded improvement area, but nothing looked improved. The creek in this area is shallow, silted and slow. More brown water, more broken dreams.

I hadn't planned on going anywhere else, but a thought came to mind to visit a creek I hadn't been to since my first season 2 years ago. Along the way, I came across 2 juvenile bald eagles on a field near the road. They were huge and I thought they were vultures from a distance. Vultures though, are not present this time of year. 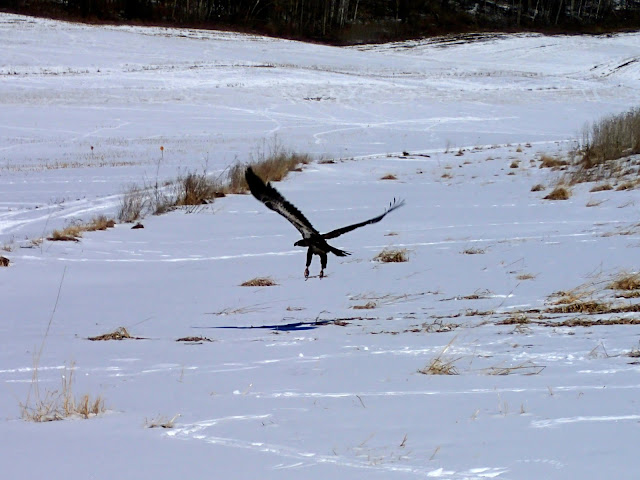 The west branch of Mill Creek, I recalled, had lots of trout but tricky casting with lots of vegetation and bugs. But today there was snow on the ground, so I expected it to be easier this time around.

I arrived to find the water crystal clear and loaded with trout. Some fish were even rising, though to what I couldn't see. Probably something very small and I have not yet acquired the skill to cast #22 midges.

Most of the plants were down but the casting remained challenging due to the high banks and overhanging trees. It was also very easy to spook fish when there wasn't a convenient riffle on the surface or a strategically shaped bank to hide behind. Roll casts were often in order. 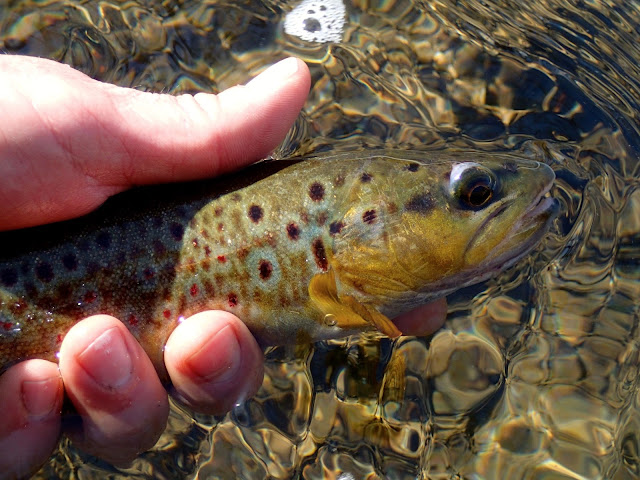 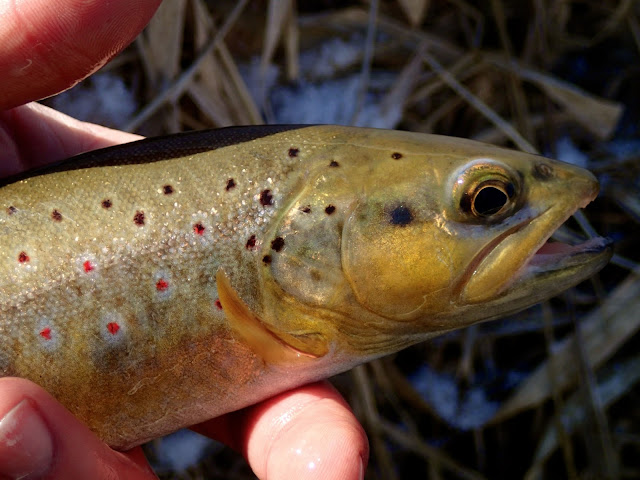 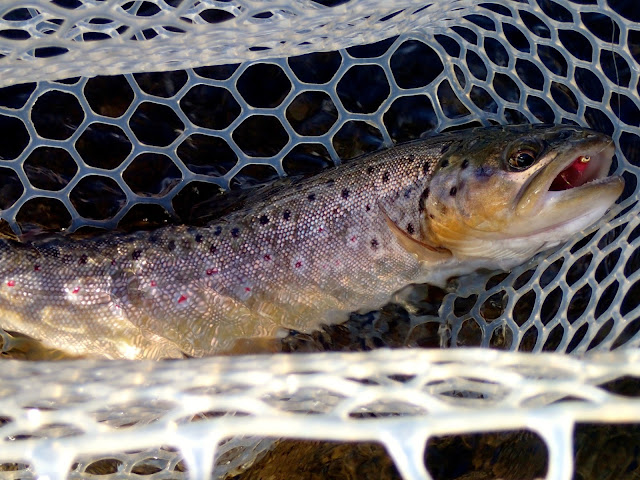 To me it's these hazards that make landing a fish so rewarding, regardless of it's size. In a few hours, I managed 8 fish, all browns and all with the infamous pink squirrel. I caught fleeting glimpses of an occasional brook trout, but didn't catch any.

I feel good about my first weekend with the trout and have a good feeling about what the rest of this season holds for me and my trouting brethren.
Posted by Dan B at 7:11 AM