Bluegill Is The New Trout?

No, probably not. I mean they're pretty. They can be caught on the fly. And, they are fantastic table fare. But they won't launch 3 feet out of the water or grow much over 10 inches. And I don't think there will ever be a Bluegill Unlimited (I just Googled it, nope). 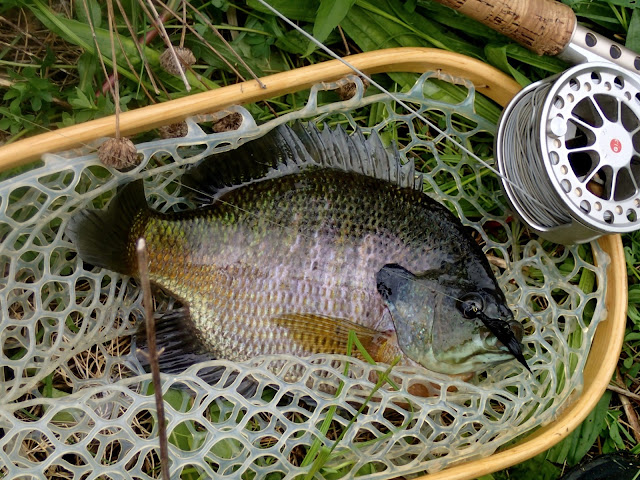 Plus they're easy to catch. Really easy to catch sometimes. Such was the case on my last outing with my friend Trapper.

Imagine a small hidden lake without the pressure of public access. It has a mile of stream leading to it with an occasional hole holding biggish brook trout. The last hole before the lake is home to a snapping turtle, large brook trout, bluegill and who knows what else because its deep and murky. And finally the lake itself, surrounded by undeveloped private countryside.

I was lucky enough to know someone who procured access to this place by way of permission. Trapper knew that there could be some 'gills to be caught today but there was also a chance that it had been too cold lately and the fish wouldn't be in the shallows. We also suspected that there may be some large brook trout to be had on the way as evidenced by activity downstream.

We both kept our expectations reasonable. You know better if you've fished a bunch. We almost called it quits early in fact, the wind was terrible and we were casting into the banks.

What a horrible idea that would have been! 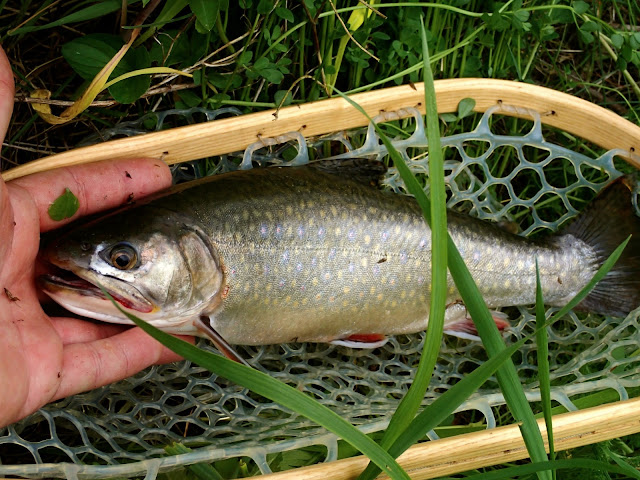 Lets start with that last murky hole mentioned above. It was here that I ended up catching my Personal Best brook trout as of this posting. 13 1/2 inches. It was caught on an olive "Milwaukee Leech" I bought over at the Driftless Angler a week prior. I chucked the fly over the hole and striped it back in a jerky manner, a technique I've only just learned to use effectively over the past couple of weeks. I actually saw it take a few swipes at it as I finished my retrive the first couple of times. Just a fishy looking flash appearing and then vanishing back into the depths. A very exciting thing to watch.

When I did hook him (or her, as it turned out by the duller color of the fish), I hadn't yet decided that it was even a trout. Maybe a bass? The lake was right next door. I then saw it's red fins and trouty spots. "Trapper! It's a brook trout!!". Trap took my rod for a minute as I reached over the rocks to try and net it. But I quickly snatched the rod back when I decided I needed to do this myself. I appreciate Trappers patience with my manic behavior at the time. 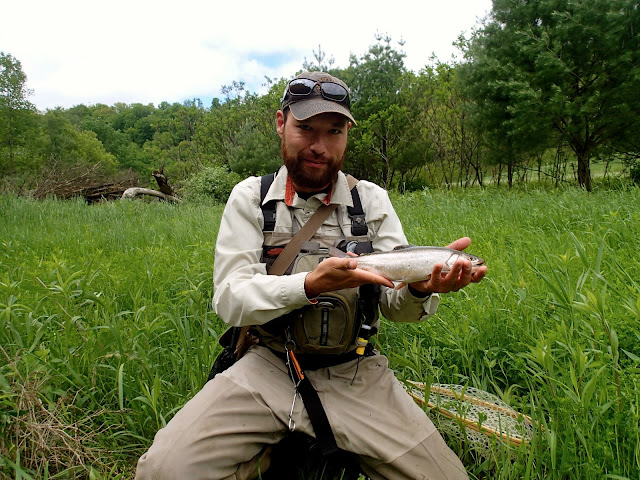 It was the first fish of the day and I felt I could leave and be completely satisfied. However, the feeling of "what else is in there" quickly overtook me and back into the drink the fly went. This is when I caught the first bluegill. Then a sunfish. Then another bluegill, then another...then another trout. Things really picked up when I switched to a heavier, black leech pattern. 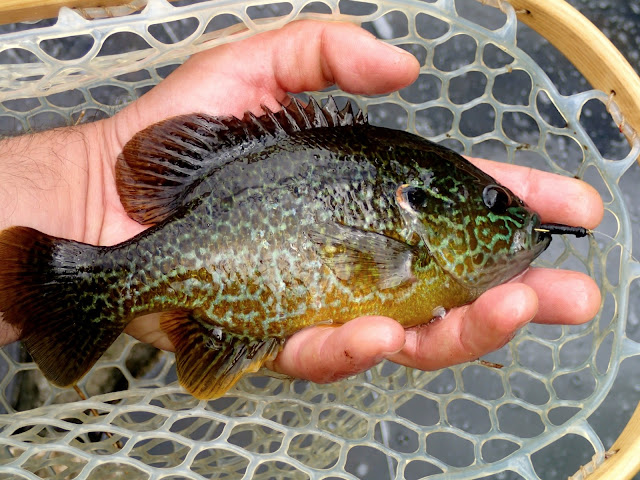 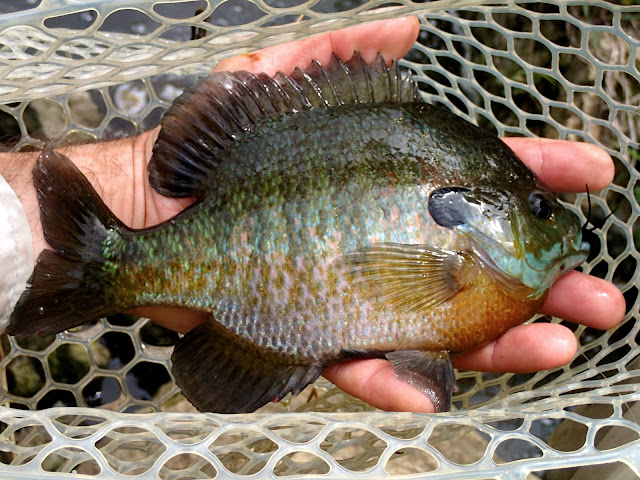 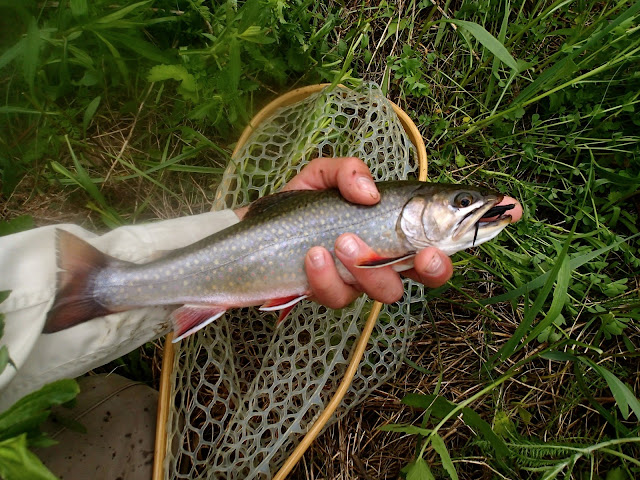 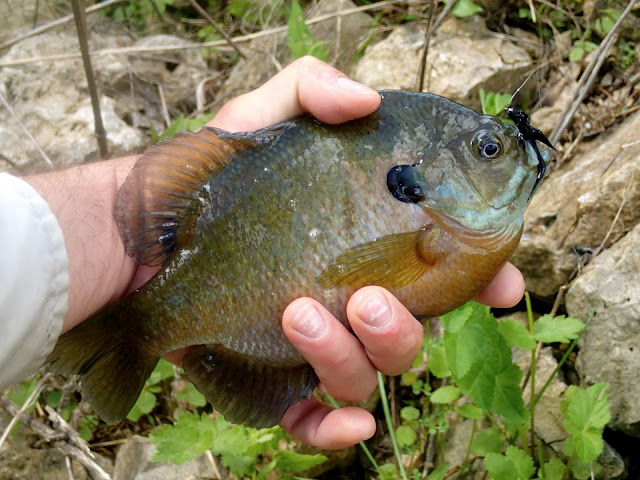 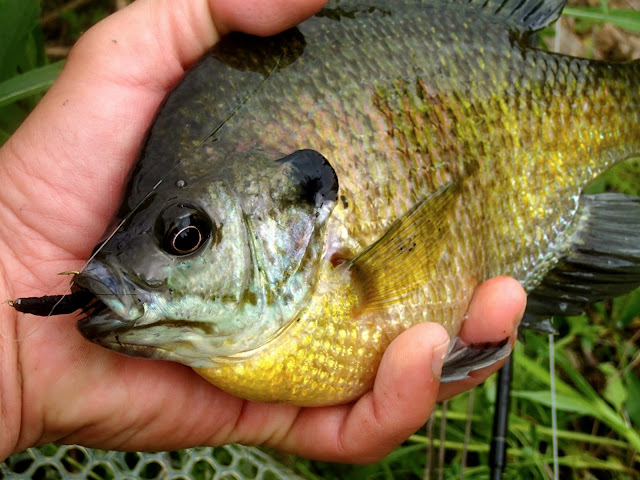 Trapper was bring in the 'gills too. I was walking my creel over to collect his quarry when it suddenly got lighter. The bottom had blown out and 2 trout, 2 beers and a few bluegills came spilling out behind me, luckily onto the grass. It was time to go old school with a stringer.

The bite wasn't slowing down at the pool but what was going on at the lake? Somewhat reluctantly, I followed Trapper to the lake shore. It was here that I got a little education on bluegill behavior from him. Bluegill start spawning in the spring, around late May and early June. Their "spawning beds" consist of a round pit in the sand or gravel about a foot in diameter. After the males fertilize the eggs they chase the females out and guard the beds very aggressively.

What we found in the sand starting at the edge of the lake and descending into the non-visible depths were hundreds of these beds, everywhere we looked. An easy cast of about 15 feet in any direction from shore would produce a fish almost every time. It was incredible. They were almost exclusively males guarding their beds, with the occasional bass to mix things up a bit. The bluegills were all large too. Averaging 9-10 inches, these were tall fat fish.

And they fought well. Almost bending my 3wt to the cork at times and pulling line out of my reel. We were having a blast with these fish and just giggled at this amazing situation. But all good things come to the end. We were running out of stringer space and we had to carry these things a mile back to the car.

It's legal to keep up to 25 bluegills per angler, but damn, that means we would need to catch 50 fish too max out and we already had 25-30 of these plump softball sized fish to carry back and clean. So we called it quits, tied the stringer to a stick and started lugging them back to the car.

Later that day, we spent nearly 3 hours filleting these bulbous blue fish. The next day I cooked a fish fry for my girlfriend and two of her boys who'd never had bluegill before. They loved them. I patted myself on the back and welcomed this tasty fun species into my repertoire of Driftless Area fishing.