1000ºF on the Perimeter of the Driftless


My forehead glistened before I could make it down the stairs from my apartment to my car which had spent the day baking in the public lot. The heat is oppressive. I tossed my waders in the back seat and glared at them like they were a pair of snow pants. How could I stand to put those on?


Updates below...
These are the "dog days" of summer. I decided to leave the trout alone today. Aside from the intolerable weather conditions, trout fishing slows down. They don't like the heat either. It can be fatal, in fact, if the water warms into the 70s. Playing a trout to exhaustion in temps approaching this will increase their likelihood of mortality. Best to leave them alone.

Thank goodness there are other fish! Warm water fish like bluegill, bass, pike, carp... Ah carp. I've really been wanting to jump on the carp train. It's trendy now I suppose. Even the upstanding Orvis Company has given this fish respect. Common big fish that can be caught on a fly, what's not to like? Well, I don't particularly like that I was totally spanked on my first attempt at these behemoths a few days ago. Probably for the best. How much would I respect a fish that's supposed so difficult on a fly if I had caught one on my first attempt? Before I turn this into a metaphor about bedding women, lets get back to my original story. A fishing trip to distract myself from carp failure.

Unlike my apartment, the air conditioning in my car is ample enough to give me the illusion that outside my Ford Taurus exists a bright sunny pleasant day. I was on my way to a creek that I've driven over and past many times on my way to the trouty waters an hour or more west of me. Its not listed as trout water and it really isn't. Looking at it from the bridges as I've zoomed past, it does contain a series of riffles, runs and pools like its cousins to the west.

I had been given the idea to search for small mouth bass here by WDNR papers that are available online. This creek has received recent improvements and features a good amount of public access. It spills into the Baraboo River, which itself has had the benefit of every dam being removed. Fish in the Wisconsin River, which the Baraboo flows into, may now navigate all the way up to where I was headed. Exciting stuff, in theory. But the idea of fishing for smallies on a small stream was still very alien to me. 90% of my fishing time is dedicated to trout. 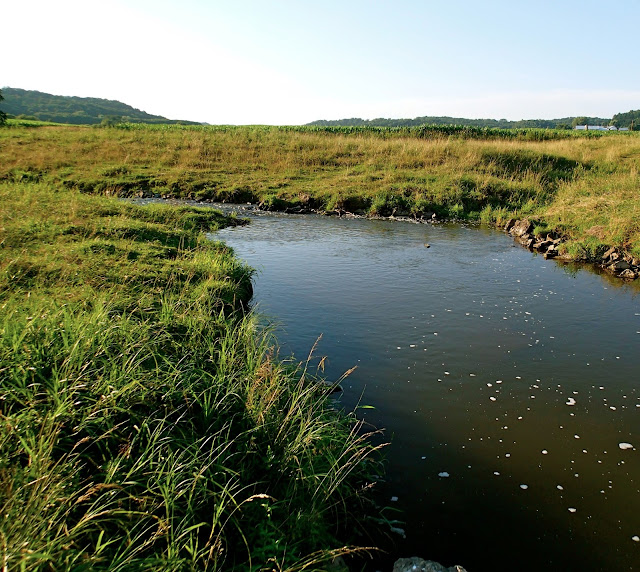 I fished the stream like I would fish a trout stream. I started with a small brown wooly bugger. Streamers, I've read, are a common way to fish for bass. I was quickly rewarded with some small tugs. To my surprise and somewhat delight, the first fish to hand was a bright little green sunfish. Following not long after, my debut small stream bass. A small, small stream small mouth!

Continuing up the pastured stream, I caught fish pretty regularly. A couple more sunfish, more small mouth bass, lots of rock bass, chubs and some other rough fish I'm not too familiar with. Everything pretty small, though a few of the smallies and rock bass were a good match for my 3wt. I experimented with a frog popper and only had a fish on once with it immediately after it landed in a rocky corner. The fish, which was tiny and remains unidentified, flew immediately into the bank as I frantically set the hook. I'm not sure he made it back in. Poor thing. I tried a hopper for a bit too, which was pretty successful, but I caught more fish after going back to the streamer. I saw a lot of crayfish and bait fish in the water so this made sense. 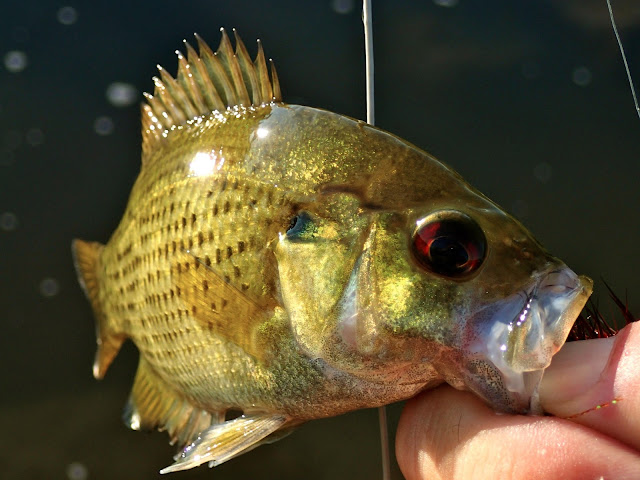 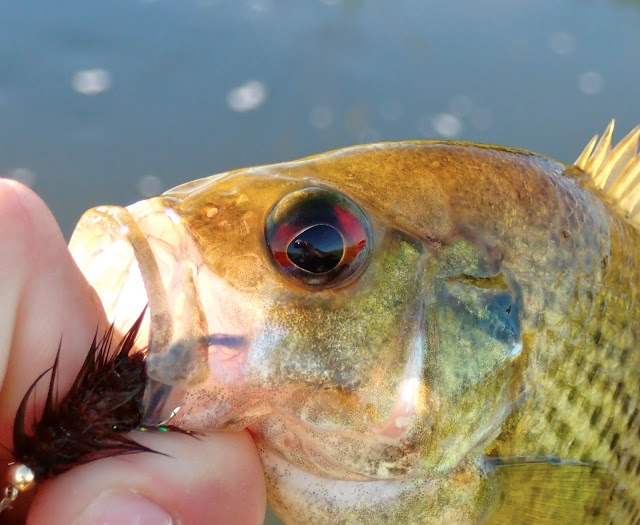 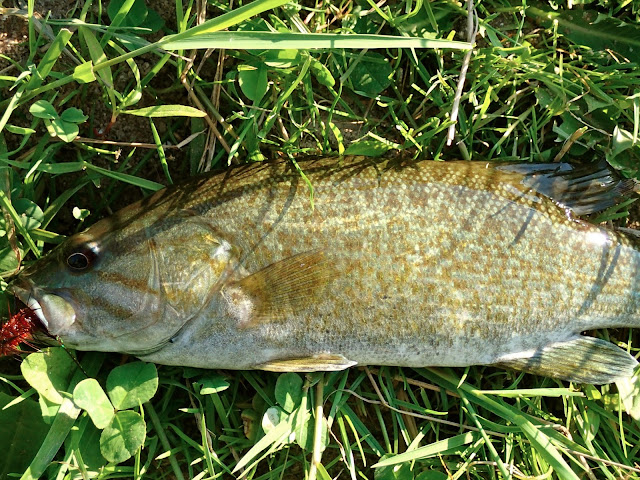 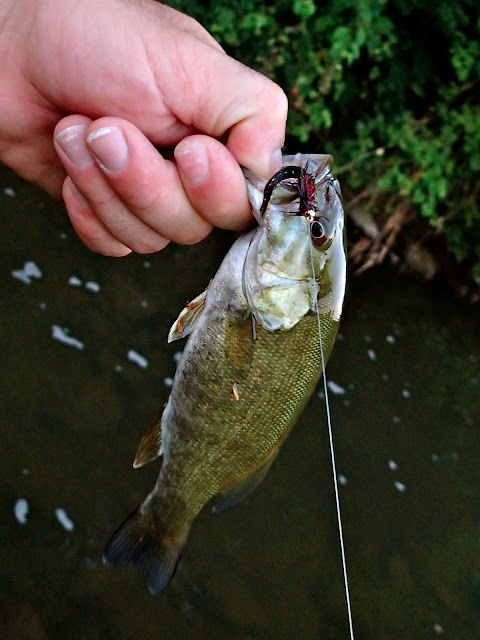 I have much to learn about this stream fishing for bass business, but I felt accomplished and patted myself on the back for sticking it out in the heat. I also rocked a "gaiter" for the first time. Kind of like those Buff things but by Columbia and even more overpriced. Seemed to cool my face and kept the bugs out of my ears. Will I go back? I think so. It was a fun alternative to trout fishing. Next time I'll try an area further down stream. I was going to start at another bridge further downstream but there was already a vehicle parked there. What did they know that I didn't? Probably everything.

Turns out that those folks parked there before me were on to something after all. I went back to this creek the following weekend and started at that bridge. Quickly caught a few little fish, then hiked down stream to fish back up to my car. Made it back to my car after catching fish similar to the ones above. However, I had by this point tied on a large chartreuse popper that was getting quite a bit of action towards the end. So, I went back to the bridge hole where I started and lobbed a cast to a likely hold. SLAM! This fish pulled drag and bent my 3wt to the cork. It turned out to be my personal best (as of right now) small mouth bass! I must submit that I am now rather smitten by fishing for these smallies.

I now have a new personal best smallmouth bass! (again, as of right now). I went back to this creek, again... this time a ways downstream into a new easement area I discovered on the DNR maps. At first I tried an area downstream from where I parked which turned out to be a long straight ditch... Caught nothing but a slimy little rough fish. I hustled back to my car as daylight was waning and embarked on a quick journey upstream. After climbing some gates and navigating up and down some less than navigable banks, the light was dimming and I found myself, as I often do, seeking consolation from nearby cows.

It was shortly after asking a non-responsive cow for encouragement that my popper, not tossed more than 10' feet upstream into a 4' wide section of stream, sunk into the depths followed by a dark, striped back. My rod quickly pulled downstream and I found myself clumsily chasing this fish from the bank. I followed it for a good 30 feet before I took a chance and turned him up my way for the last time and scooped it out with my net. It was a 14" smallie and my new personal best! 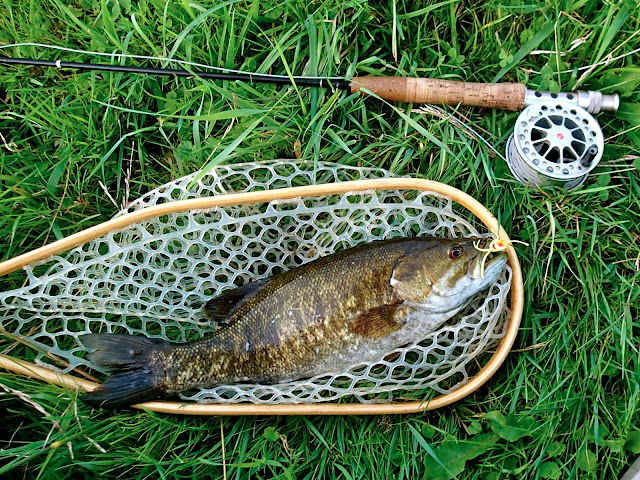