A 7 Hour March Though Hostile Territory

I got a tip from a friend. I like to think of it as a secret mission from Headquarters. 2 to 3 stream miles of water, phenomenal fishing, no public access except for the bridge at the beginning and the bridge at the end. When you're in, your in. One way, no return...

I would begin my assault early Sunday morning. Base of operations was located at a campsite in central Richland County. The Saturday afternoon prior to my mission I began a couple of training missions in nearby streams. The first would prove immediately fruitful despite some nay-saying by indigenous tribes. Stripping a brown wooly bugger past a feeder inlet produced 2 trout, one just over 15 inches. Each of these fish seemed to materialize from behind an underwater cloud that the feeder stream was generating. I watched both of the takes happen. The rest of this creek provided only scenery, but beautiful scenery. 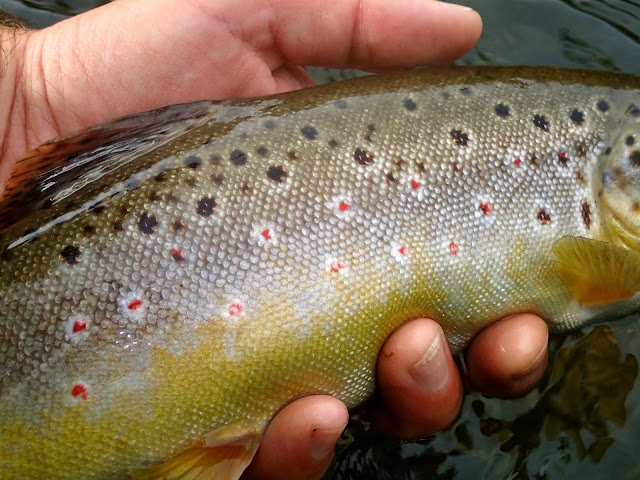 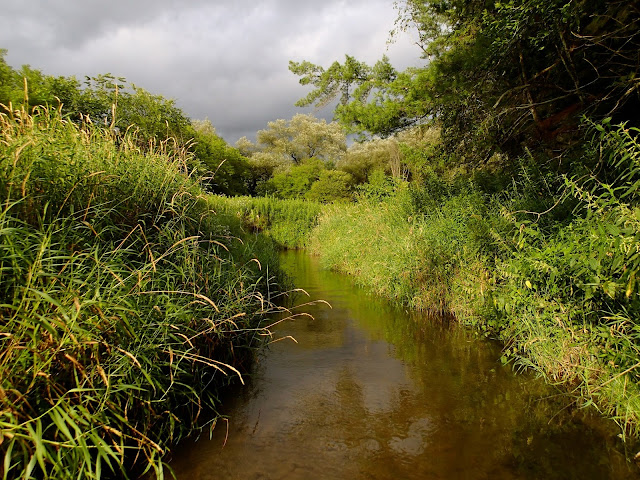 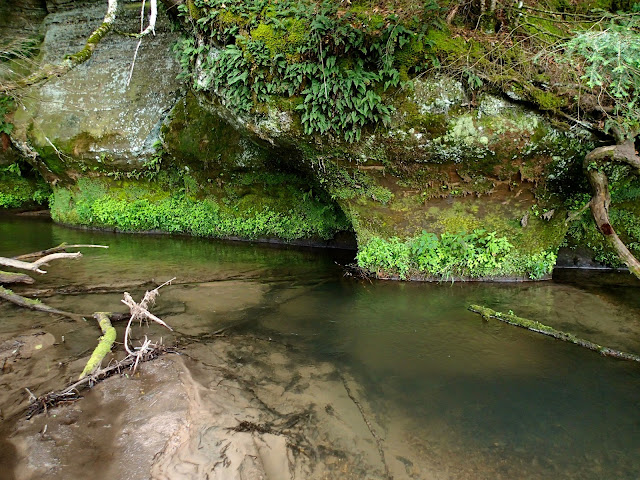 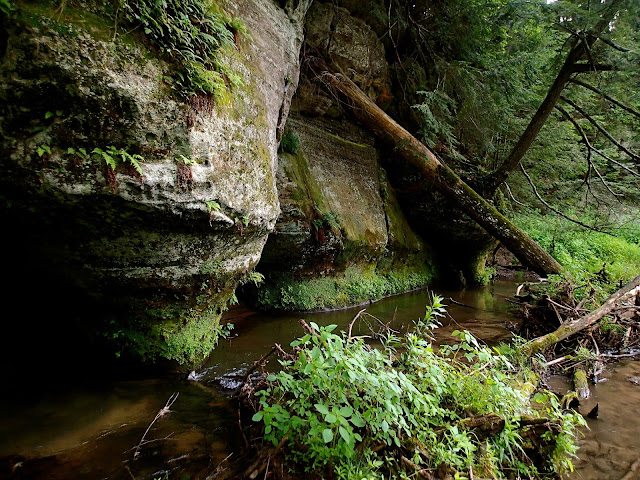 Further up the main branch of this river system, I arrived at an old stand by, a bridge that had provided excitement in the past. This time would be no exception. They were eating grass hoppers now. Several trout were conquered in the 12-14" range. I let them surrender for the evening and traveled to a nearby cantina to replenish my provisions before climbing back into the tent for the night. I set my alarm for 5:00 AM. 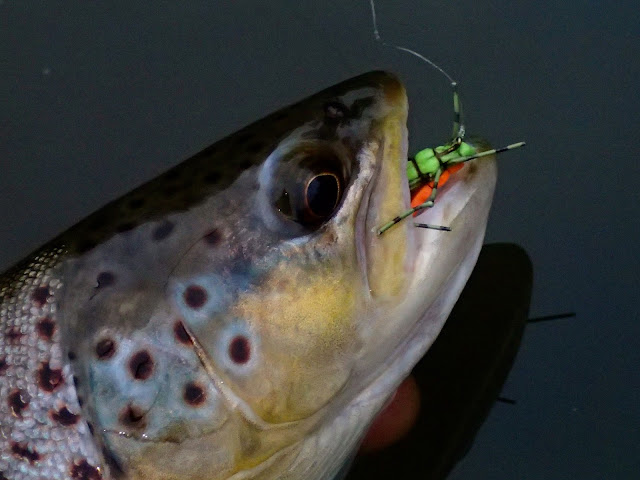 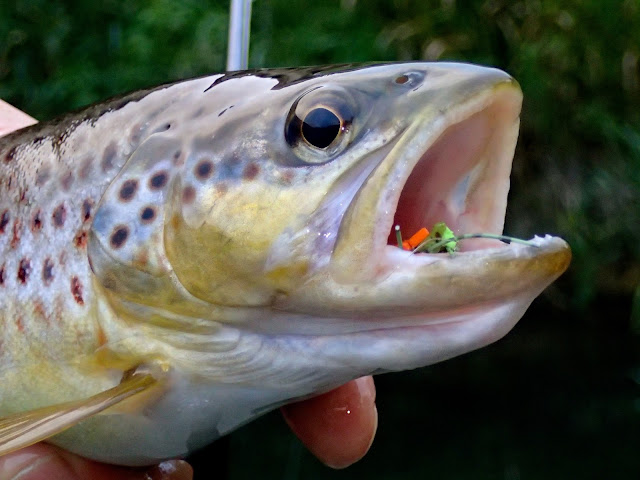 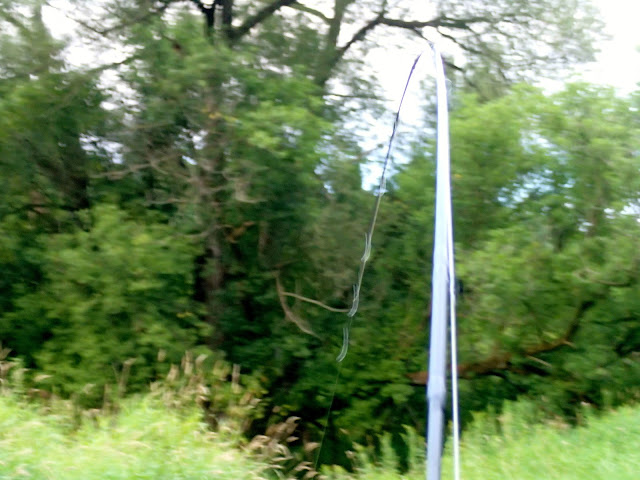 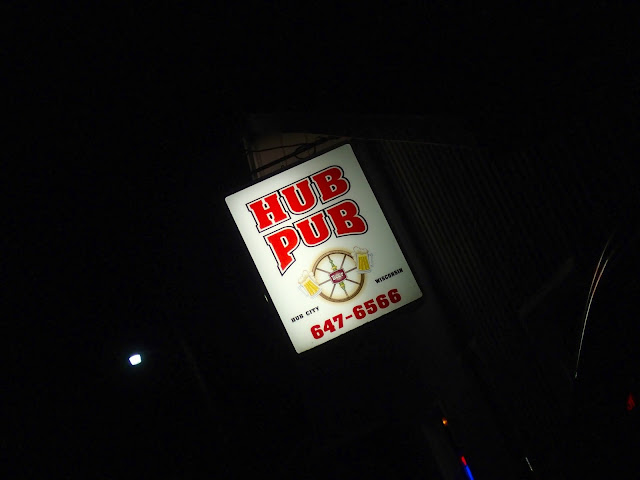 The night chilled unseasonably into the upper 40s but I slept well enough to be woke up by my alarm. I took my time as it was dark and I only had a few miles of travel to the drop point. I pulled on all my gear and assembled my weapons before getting into the car. This way I could act quickly upon arrival.

When I stepped onto the bridge, it was evident that my kind was not welcome here. Immediately upstream from the bridge, a thick wire grid spanned the width of the creek and down into the water. Atop its 4 foot height, a taut braid of barbed wire complemented this security. As if that wasn't enough, several feet further upstream another set of barbed wires criss-crossed the stream at varying heights. Were they keeping velociraptors in their pastures?

This may have been to deter a lesser angler, but despite this obvious display of fisherman hatred, I was still in the great state of Wisconsin. In our state, a fisherman may wade any navigable body of water provided it is from a point of public access. We may also exit that water to bypass an obstruction.

So, with these obstructions before me, I found myself on land in hostile territory. I kept my eye out for velociraptors and the pitchfork wielding nut cases that surely hid in the bushes nearby. I would perform several harrowing acts of wader threatening acrobatics to make it to the end of this stream section. Oh yes, this initial obstacle course was only the beginning.

Now for the good news. The fishing was not slow on any part of this stream save for an area that some cows were muddying up (even the cows seemed hostile, mooing angrily at me...). The fish averaged 12" with half of them being 13+ inches. This was half of about 40 fish to hand. They were slamming the hoppers. Most of the large fish came out of long straight areas from under grassy undercut banks instead of the obvious pools. The obvious pools, of which there were many, held fish too of course. Sometimes more effectively caught on streamers. The stream was a model of prime trout habitat without any apparent improvements by man. 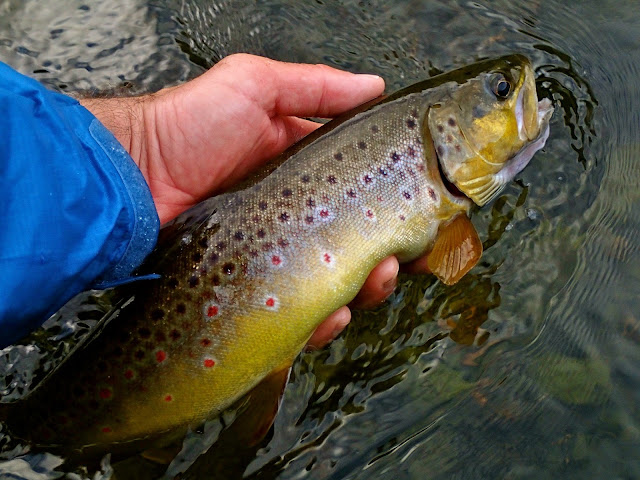 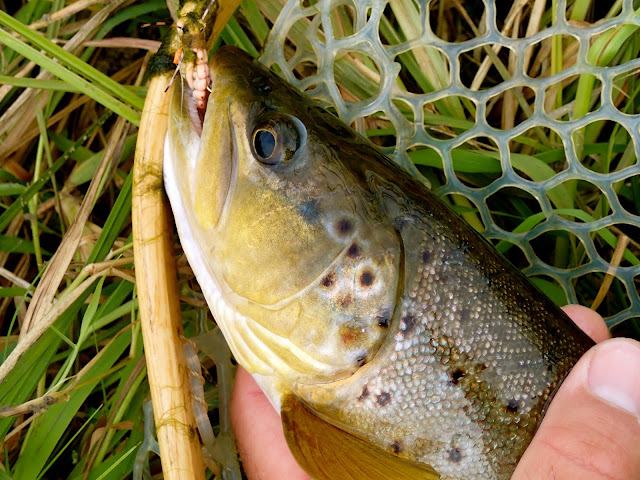 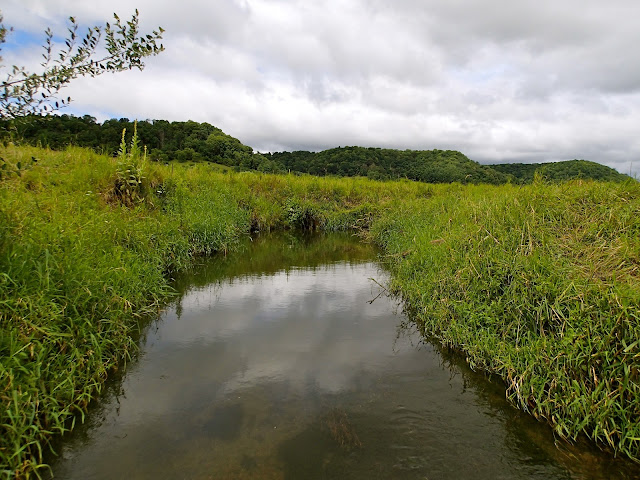 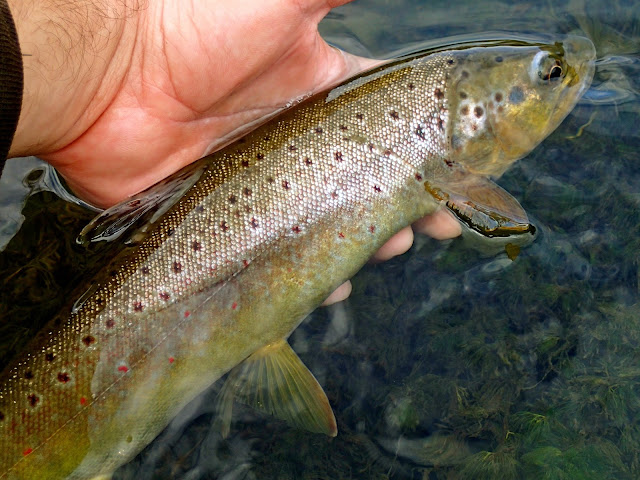 As I mentioned earlier, this stream was flanked by private property. Because if this, there was no climbing on to the bank to take a peak at how far it was to the next bridge. As the 5th and 6th hours on the stream wore on, I really started to regret forgetting my cell phone. My plan was to meet Brown Beard back at my base of operations by 11. I checked at the time stamps on my photos, but later found out they were at least an hour off.

During the last several bends, I found myself stomping quickly though prime looking water questioning my resolve. My left leg was starting to scream at me. Even with my hasty casting and thoughts of Spotted Cow back at camp, the fish kept smacking my hopper. When the bridge finally appeared before me, I spent a little time fishing the bridge hole, which produced nothing, and climbed my way back to semi-civilization. Would the enemy be waiting for me on the road back to my car?

I made it back to my car in 15 minutes without being detected. I checked the time, 1:34 PM. Sorry Brown Beard. My phone had several calls and a text message which included the phrase "move your ass".

Will I be returning? Maybe with a partner, it would have been nice to take a few breaks and watch someone else fish. I don't care for confrontations with land owners. It seemed like they were there the whole time, threatening to tear apart my waders and sic their cows on me. The fishing was spectacular. On the one hand, it's a shame about the access difficulty. But I know damn well that the awesome fishing was directly connected to that lack of access. Ya, I probably will return, or at least send some other solders in to aggravate the enemy :)