You may recall Brown Beard from previous posts. You may also recall a trip I took with him and his brother earlier this spring. With the end of the season approaching, and a few more vacation days to burn, we plotted a sequel to that trip... 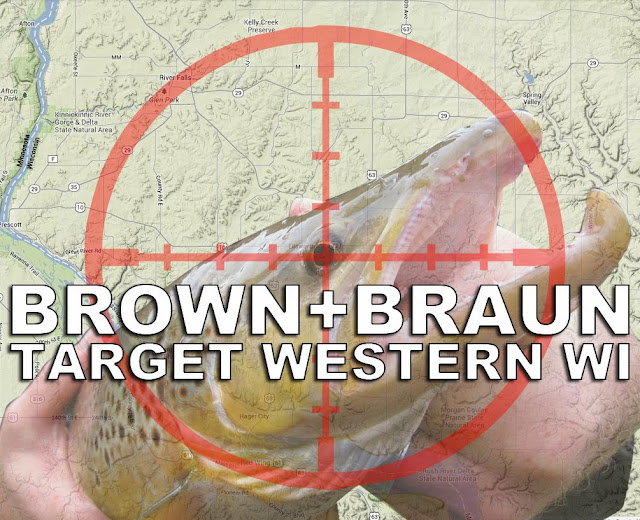 Yes, I made a custom graphic for our fishing trip. Hell, I made one for our previous trip, but I'm going to hold on to that one for the time being.


Western Wisconsin. Much too far away for frequent visitation. But I've seen far too many large trout grip 'n grin images from this area not to take a whack at it at least once a year. I'd been there once before. It didn't turn out good. That trip was marred by large amounts of rain. But at least then I was by myself. This time, I convinced the Brown brothers it was worth a try.

The Browns were going to stay from Sunday to Thursday. I was set go home on Wednesday, but started fishing on Saturday. My trip didn't start up there in western Wisco though. The band I play in had a couple of gigs in La Crosse Friday night and my new trouting buddy, Eric, offered a place to crash right in town. This worked out perfectly because it allowed the two of us to hit up a creek near the area Saturday morning. The ever resourceful Trapper had relayed some intel earlier that week to me that there was a spot on this creek that was just chock full of trout based on a recent electo-shocking survey.

The DNR regularly assesses the trout population of a stream by sending a team to wade down it with an electric probe, temporarily stunning the fish so they may be measured, counted and otherwise molested before returning them to the creek dazed and forever cursed with nightmares of alien abduction. I hope to some day assist in one of these electro-fishing trips!

Anyway, I took this hot tip and brought Eric along with. Not only did I have Trapper's information, but the word of a couple of young boys on bicycles who were eager tell us about fish "this big" they had seen not far from the bridge we stood on. Unsurprisingly, we soon learned we were indeed on a good stretch of water.

Eric hauling one in 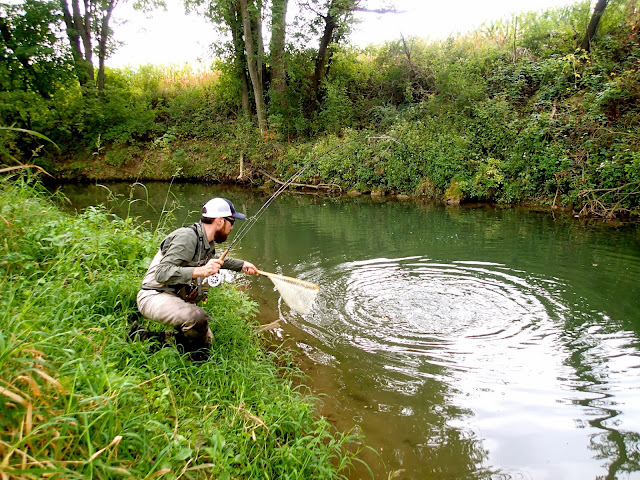 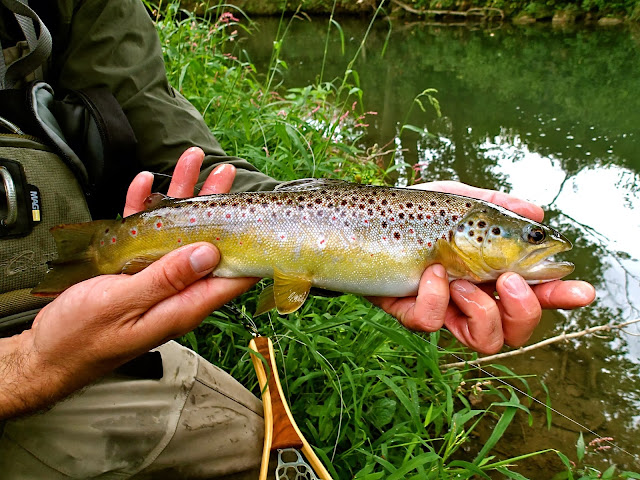 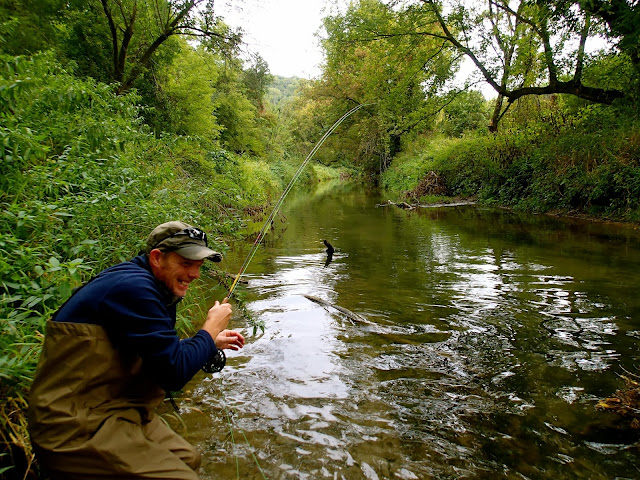 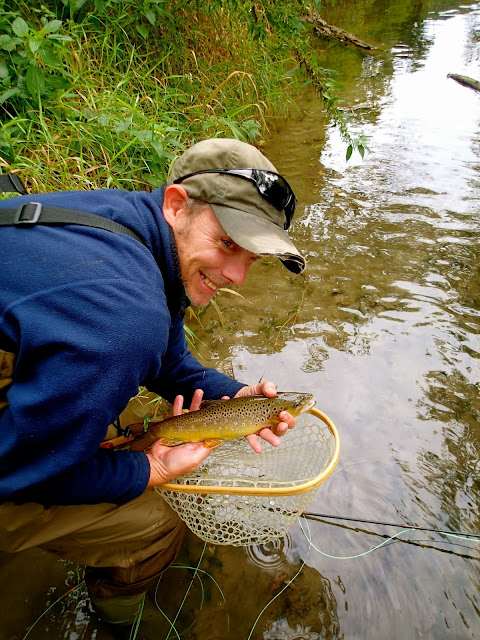 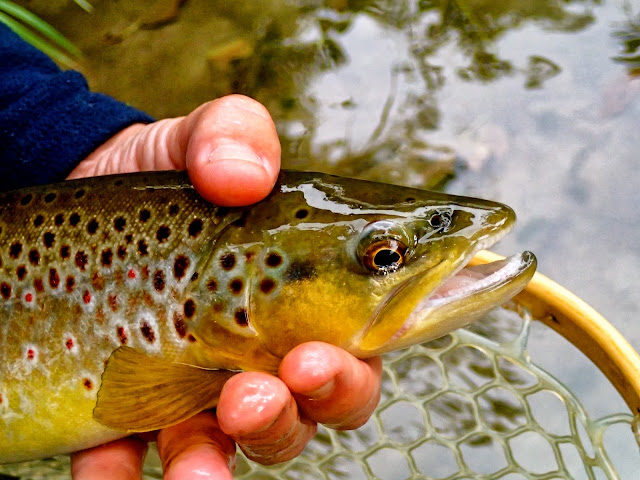 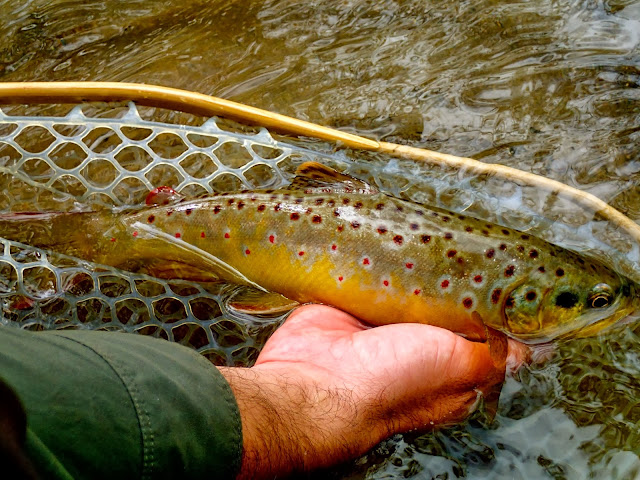 This was a great way to start my 5 solid days of fishing. Eric and I parted ways (not before he handed me about a dozen bass flies he tied, thanks man!), and I started my journey further north up the Mississippi valley.

My destination was the Highland Ridge Campground on the Eau Galle River, chosen for its central location amongst the rivers and streams we planned to fish. I set up my tent and utilized the fleeting sunlight to fish a bit of the Eau Galle. This proved fruitless, though I could see some trout from the bridge. Back at camp I spent a chilly evening in the dark on my chair while trying to read a book with my headlamp and occasionally glancing longingly at the neighbors raging, unattended fire. The next morning I awoke and broke camp. I would be moving to the a new spot in the same campground with the Brown brothers who were to arrive later that day.

With the help of the trout fisher dating website known as Driftless Trout Anglers, I had befriended a few "trout agents" in the area. One had relayed some intel on an oft-overlooked creek not far from my camp. The trip there included a chance to gaze upon the biggest trout pond I've seen to date. It was mostly populated by some of the biggest rainbows I've ever seen in person. The directions I received to the location of my destination for the day were a bit vague, leaving room for my own exploration. After passing up a few bridges, I arrived in an area that looked OK. Not particularly inviting, but it was time to get fishing. As I geared up, a gentleman in a truck pulled up and asked if I was trout fishing. This was a good sign because it means people actually do that here! He then warned me about fishing downstream because there some bow hunters on the property. I planned to fish upstream anyway, but couldn't help but wonder what it would feel like to get pegged by a compound bow.

I say the creek looked less than inviting because it was heavily treed. The bottom was very sandy and the water was frequently broken by fallen trees that sometimes completely blocked passage, forcing me to either weave myself and my gear between densely criss-crossed branches or climb out of the stream completely. Room for backcasting was few and far in between and so were signs of fish. While I had one strike shortly upon entering this wooded cavern, it would be an hour or more before I made a connection with my first fish to hand, a plump 14 inch brown trout. 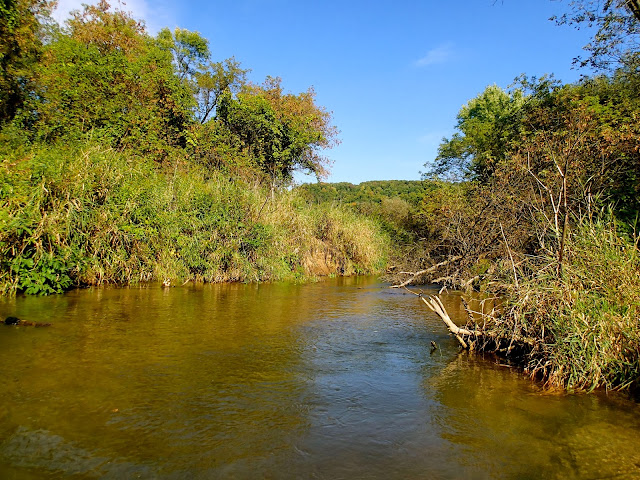 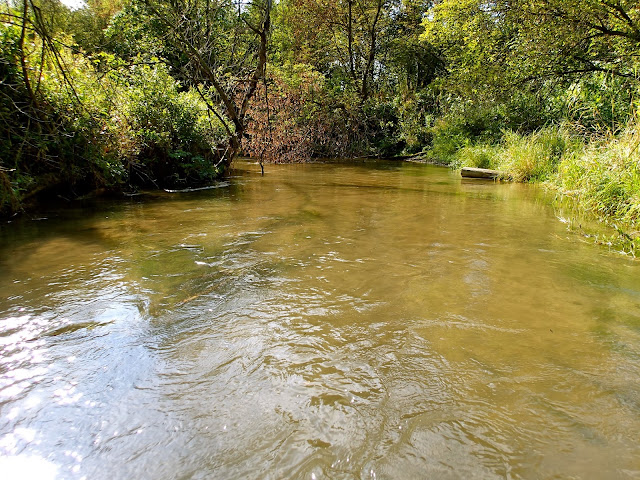 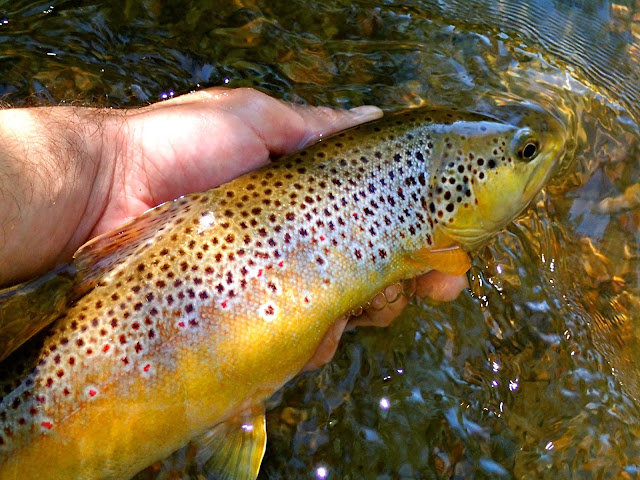 As would be the case for the remainder of my trip, the sky was nearly cloudless and the sun blasted the water, keeping trout out of sight. Surface action seemed nonexistent so I kept underwater with my flies. The above fish chose the wooly bugger from my bugger-scud combo. The second and final trout to hand fell to the trailing scud. My first ever trout on a scud! And a nice fish by my standards at 15 or more inches. I had executed a crisp roll cast (yes, I'll call it crisp) toward the outside of a bend in the creek and allowed the current to push my flies under a stump in the shadows. I watched the fly line go tight and not more than 10 feet in front of me this chubby fish launched at least 4 feet out of the water making that fluttering sound trout make when trying to swim though the air, before reentering the water with a gratifying splash. 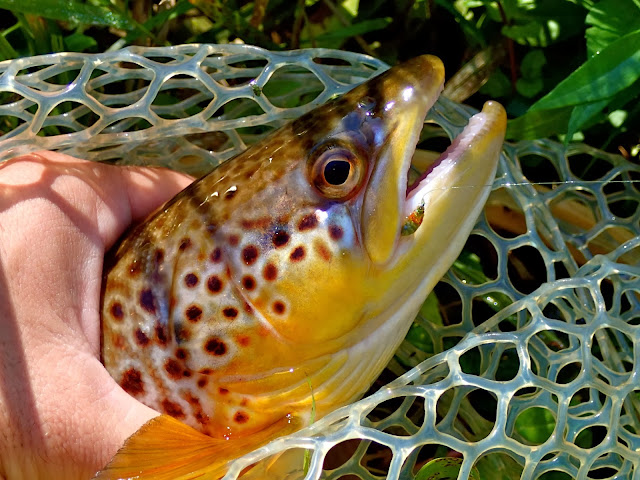 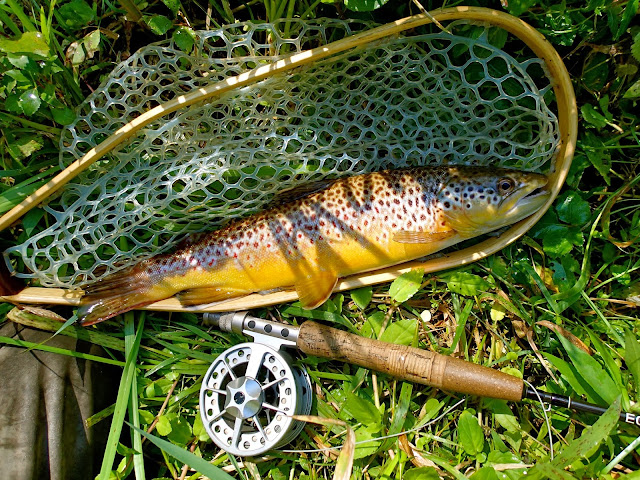 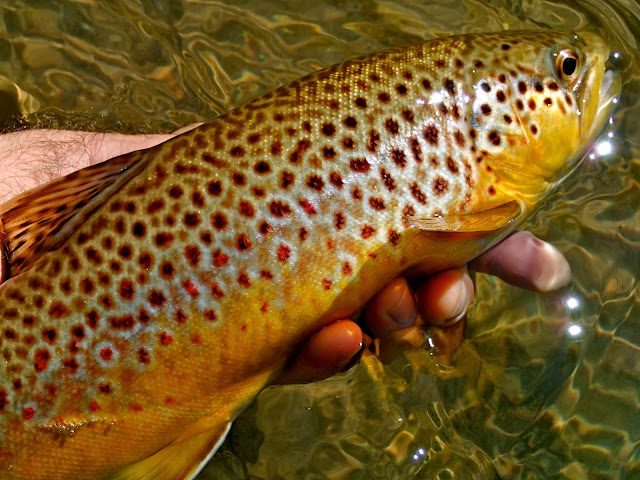 I fished for another hour or so before turning around to head back to the bridge and my car. I didn't know how far I'd gotten into this stream and I wanted to be back to camp before the Brown brothers had gotten to far along with the nights planned festivities. I meandered in and out of the creek trying to find short cuts, but it was tough going either way. I saw no other fishermen on the way so I didn't feel so bad stomping downstream.

I returned to the new campsite to find the Brown brothers had already arrived and had begun setting up their popup. I set up my tent and as planned we began our Sunday Oktoberfest festivities, complete with authentic bier steins, German lager and Tyrolean hats. Brown brother Ethan was actually the only one of us with one of these feathered hats, but he let me borrow it for a few minutes. 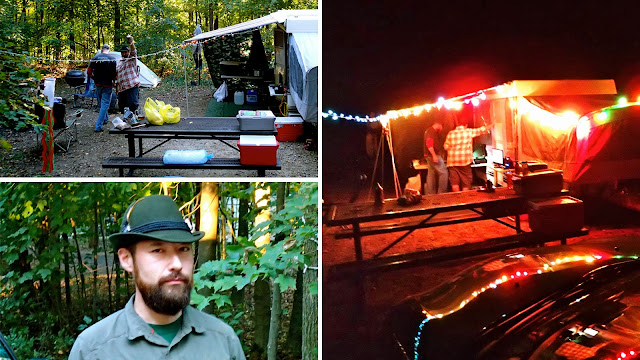