I awoke the second morning of camping in my tent with the usual mental and physical struggle between having to take a leak but wanting to stay buried in my sleeping bag because of the cold morning temperatures. Finally emerging into the daylight, I found Brown Beard cooking his usual restaurant quality breakfast for all of us. We ate and planned our day. 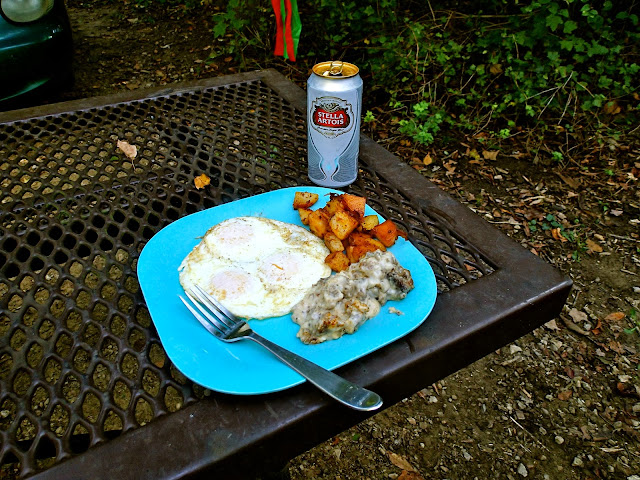 We decided to go to the Kinnickinnic River. It's somewhat famous, and we wanted to know what it was all about. First though was the obligatory trip to the local fly shop. I was in need of some streamers for chasing big trout. Brown Beard found a number of well priced flies and Ethan left the shop with a very stylish trout themed thermometer that will be the envy of his neighbors. The shop staff was very helpful and pointed out a couple of access areas on the Kinni.

We started at an access that was right in town. It was peculiar, I thought, to park our cars right in the middle of a neighborhood and hike down a trail that basically took us between two houses and down the ridge toward the river. We were well aware that this was a highly pressured river due to its proximity to the Twin Cities. And indeed, once on the river, we found other anglers both upstream and downstream from us. Coupling this with bright clear skies, low clear water and our lack of experience with this river, we each earned a big fat skunk.

With our tails between our legs, we evacuated the situation and drove upstream to try some smaller hopefully less pressured water. It was free of other anglers when we arrived and there were at least the occasional fish rising here and there. But the Kinni up here would not give up a trout for Brown Beard and I. Ethan, fishing spinners, managed one or two small brook trout. If the Kinnickinnic had something to give us that day, it was beautiful scenery and our own asses. 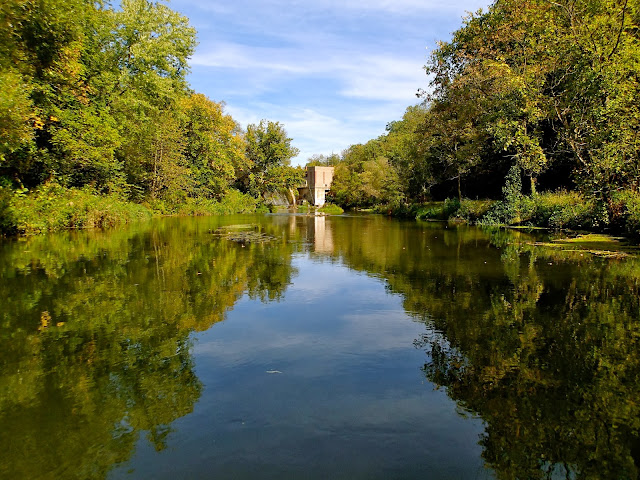 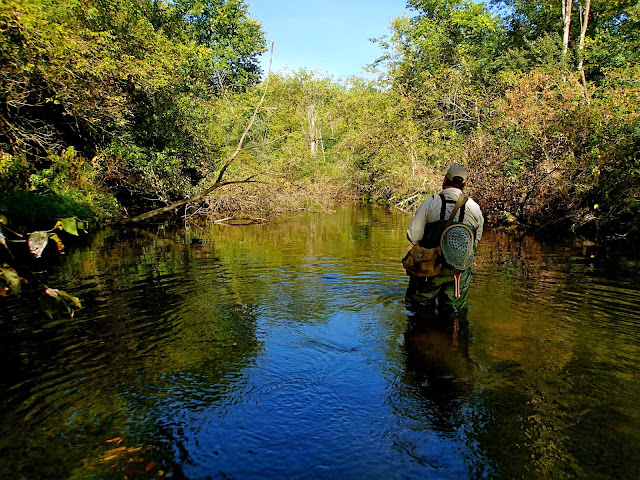 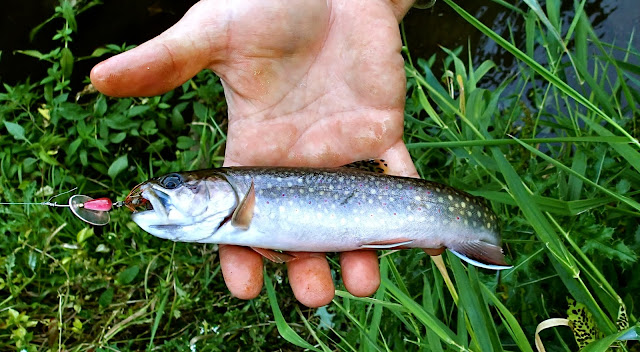 Backing up time a bit, on the ride from the first spot to the next I made contact with Eddie Rivard. Eddie, who lives in the Twin Cities, is an avid fly fisherman who frequents the area. He had that evening free and wanted the meet me that night to fish. Fishing at night? I've never fly fished at night, but was aware of the strategy. One that used flies tied to imitate a mouse. A had all of one mouse in my box, a Moorish Mouse.

I parted ways with the Browns, who were done for the day. Eddie directed me to a spot in town to fish the remainder of the daylight until he could meet me there. It was an interesting spot to do some urban fishing but ultimately proved to be no kinder than any other parts of that mean river.

Back at my car, I kept my waders on and watched it get dark. Some time later, a pair of headlights entered the parking lot. Eddie greeted me welcomed me aboard his Honda Element.

Fast Eddie might be a good nickname for him. He drove fast. He talked fast and when the first spot seemed to be inconveniently lit by a street light, it was with the same manic speed he decided to ditch the scene for a more appropriate setting. Conversation shifted between beard growing, UFOs and Eddie's trade as a locksmith before we ended up on a creek that looked more like the smaller southwest Driftless area creeks that I'm used to.

Fishing at night is not as completely dark as I'd imagined. In addition to starlight and scattered street lamps near farm houses, we had a 3/4s full moon to use. It's highly recommend to scout out the pools you'll be casting to in the dark, but I had someone with me who did that already. He pointed out the faint outlines of likely holds and taught me to listen for the plop of my mouse on the water. A slightly soaked mouse is preferred as the plop sound they make is more tantalizing to nocturnal trout. So the sequence was this: short cast, plop and jerk-twitch pause while retrieving the mouse. I'll admit, I didn't have high expectations for this eclectic form of angling.

But then I got my first strike. Scared the bejesus out of me! Then another and a fish was on. I flipped my headlamp on and landed him. Not an especially large fish, but my first fish on a mouse.
We plodded along for a bit longer almost losing each other at one point before Eddie brought us to our third stop. This time a bigger stream, a popular one. This is another feature of mousing. Those big obvious holes that receive lots of pressure and generally suck during the day, those are the ones you hit at night.

Mousing has the potential to bring out the biggest most weary trout in the stream. Trout that have gone completely nocturnal. And you can catch them right in front of you.

Eddie brought me to a pool that comprised of a deep bend with a small inlet from a feeder stream. The inside of the bend featured several large dead branches that protruded a dozen feet out of the water. The outside was rocky and deep. I followed him as we slowly moved though, past the dead branches casting to the outside of the hole that was barely visible - just listening for the plop of our flies. Eddie made it to the end of the pool first and headed further upstream. I lingered behind and made a few more casts to an area we had just walked though. As I neared the end of a retrieve, I heard what I thought was a faint gulp at the surface of the water not more than a few feet from my rod tip. I lifted the rod and felt the unmistakable sensation of a head shake. The fish quickly pulled some line from between my fingers and I let him have a little at a time in an attempt to keep the line tight. "Ed, I got one! A big one I think!". Eddie quickly returned to the hole and we both turned our headlamps on. Through the water we both saw the ghostly warbled shape of a large trout. Maybe 20 inches. The trout paced left and right with an occasional shake. "You're the man!" Shouted Eddie. I replied, with my usual cynicism, "I'm not the man yet..." and almost on queue, the hook popped off and my line went slack. The fish, still in our headlamps, did not swim away immediately, as if to taunt us. Eddie could almost reach it with his net, and tried to, but the trout was gone in an instant. My heart raced. I lost the fish but caught the mousing bug.

It was about midnight when I lost that fish. By the time I got back to the campsite, it was around 3 AM. Whatever the Brown brothers were up to, they were now fast asleep. I was not tired, but did manage some sleep before the next day. 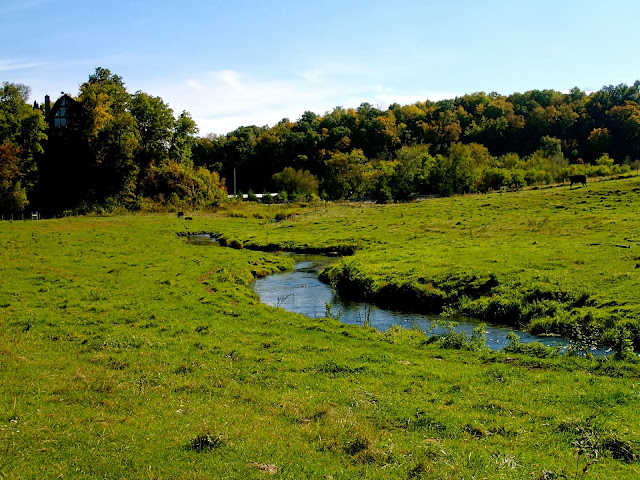 In the morning, I took a suggestion from Eddie that we all try one of the creeks from last night during the day. It was the smaller creek that I caught my first trout on a mouse, the one that was more like the smaller streams we were used too. I started down stream from the bridge to give the guys some room.

I hiked a ways along a tree line that I thought housed the creek only to find out that the creek veered away from where I was going, so I had to back track. When I got back to the water, I found it to be slow and unproductive, so I headed upstream to see what the others were up to. They must have been doing ok because immediately upstream from the bridge I started to catch a few fish, a tremendous improvement from yesterday! It was a classic pastured trout stream, and after putting a few trout in the bag to be smoked later, I just followed the Brown brothers and tried to get a few good photos. 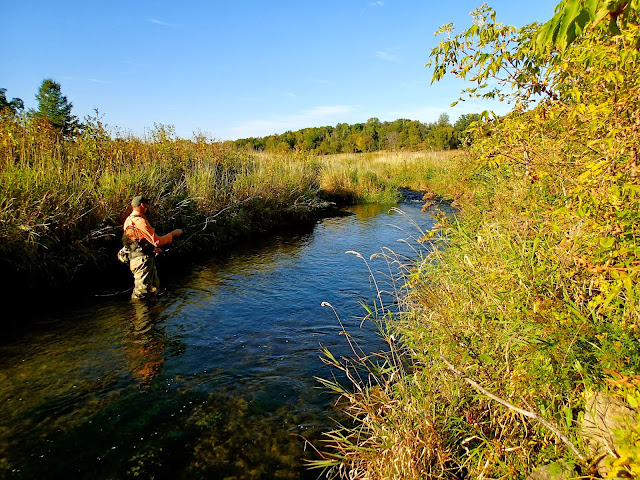 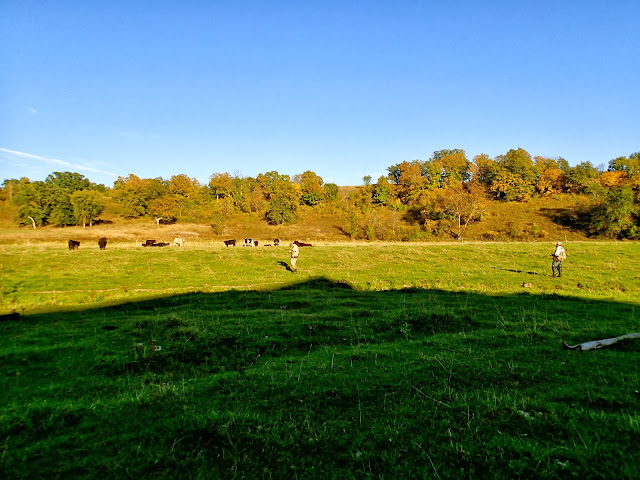 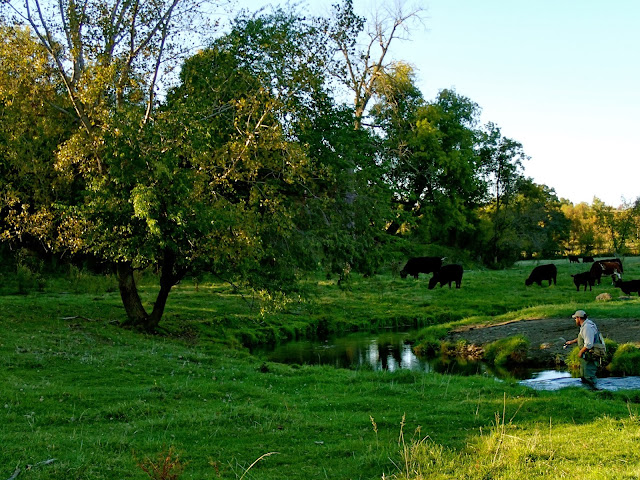 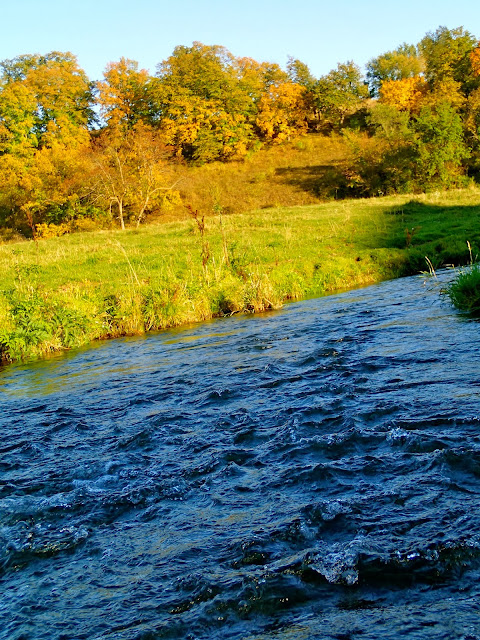 This was a nice creek and I made a new cow-friend, but my mind was on what was to come that evening. Eddie invited me along for another night of mousing. This time with fellow troutman, Ger. Eddie taught me to mouse and Ger had taught Eddie to mouse. That evening, we were to become... The Three Mousketeers™.

We went back to the river from the previous night. Eddie and I lead the way while Ger batted clean up, catching fish form pools we were finished with. It was humbling. I had some action too, but Ger was a machine.

We made it to the hole where I lost the big brown. I wanted there to be a story of sweet revenge but it wasn't meant to be. I caught a few fish but nothing earth shattering. It was a fun night however and my interest in fishing at night with mice was solidified. Thank you Eddie and Ger! 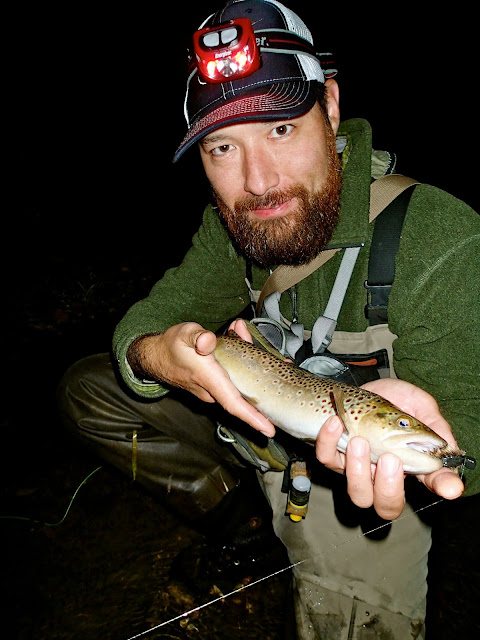 The next day, the Browns and I spent one last session together on a much too clear, much too sunny and much to fish-less river. Well, the river had fish, I pulled a several out the night before. But the difference was... night and day. A beautiful piece of water though, as we all say when we're not catching, but it really was. I had to drive back that night, so I left in the early afternoon. The season was almost up. One more weekend. I would spend it back on more familiar waters. 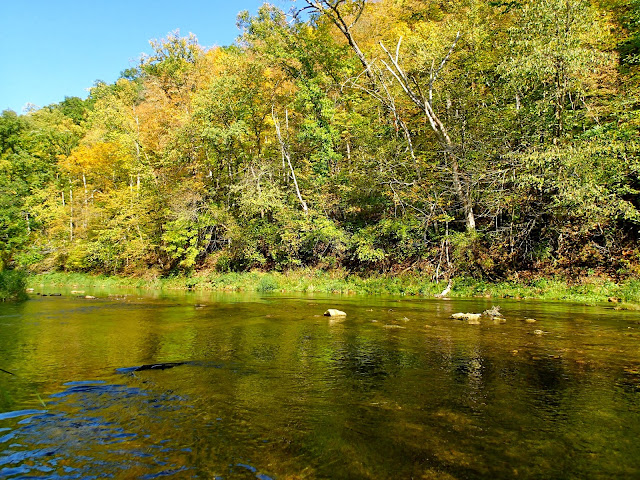 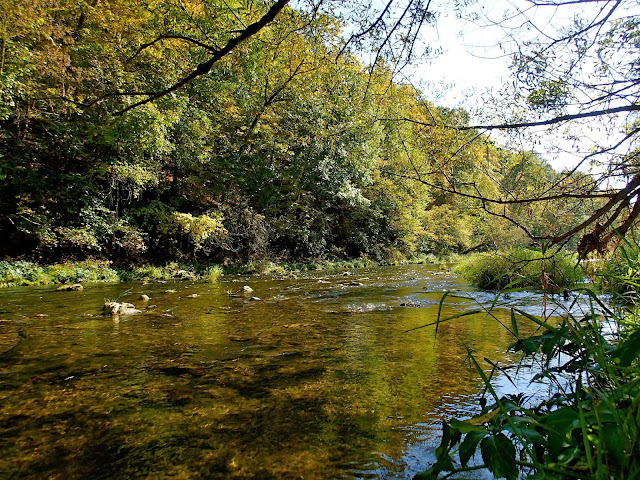