As I finish up this post, the 2013 Wisconsin inland trout fishing season has ended. I'm behind with this blog. So, lets go back in time together and read about why I hate fishing with you!

I enjoy my fishing partners, the precious few that I have. I hope to find many more as I continue this trout-venture. But I must acknowledge that I prefer going solo. I enjoy selfishly hogging the stream to myself. My pace, my holes, my guidance-free sloppy casts. It's not just the fishing. It's the drive, the camping (if applicable), the lunch stop, the visit to the fly shop... The whole dynamic is different when you're by yourself. Do I feel like stopping to take a picture of that field? Yes! Anyone mind? No? Great!


This weekend trip was a premeditated solo adventure. Having both Saturday and Sunday available to me, I rolled out in the morning onto the first county highway west in an unhurried manner with my sights set on some marginal, new water. I got a peek at this spot when traipsing around the Driftless Area with my buddy Trapper the previous weekend. Wanting to take a closer look, and not wasting anyone else's time, I drove onto the gravel road and left my car at the bridge. 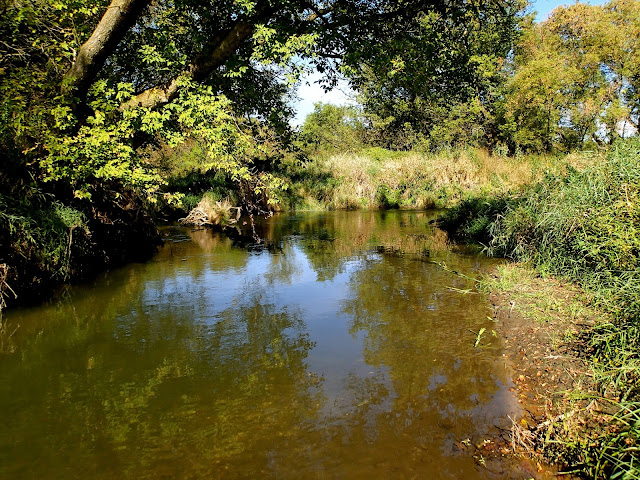 No bites, no signs of trout anywhere. My fishing buddies should thank me for not dragging them to this place. If this spot is ever alive with fish, today was not the day. Further upstream, I stopped for a few casts under a bridge and pulled a healthy chub from the silty depths. Climbing up from under the bridge, I bounced my head off the yellow and black sign at the end of the railing. That's something my fishing buddies would like to have seen. 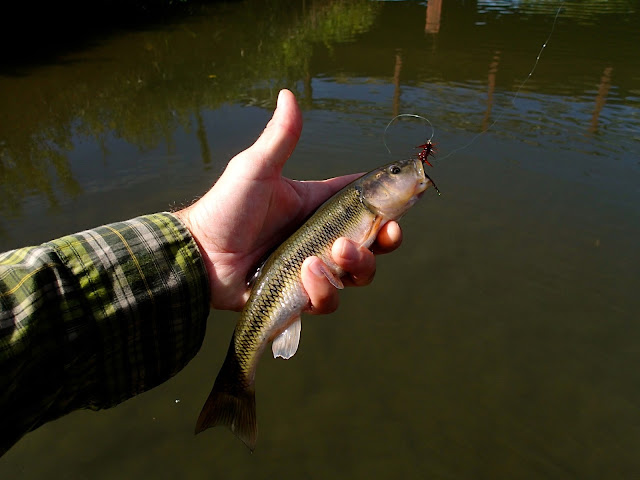 It was an hour drive to Viroqua from here, but a beautiful drive. I took alternate roads and explored new valleys. I got into town and bought a few flies and replacement boot laces for my deteriorating wading boots. The boots are ugly but still work fine. The laces however were shredded with intermittent sleeved sections that would slide along the exposed white core. With new laces, they might as well be new boots as far as I'm concerned.

After replenishing myself with some pizza and Stella Artois at the excellent Driftless Cafe, I headed further west into the Bad Axe system.

Solitude in a Driftless stream can be elusive on a beautiful Saturday afternoon. But I found it. A long hike is usually in order if you want to get the heck away from everyone. I parked in an unlikely parking area far from the water. There was in fact another angler that followed me down the long gravel entrance. He wanted help. I informed him of easier access - away from here. He thanked me and went away. I started the long march down from the ridge. On the way down, I pondered the conflict between this tranquil solitude I now experienced and the knowledge that I would not know of this area without the help of a friend who fished with me and shared this area with me. 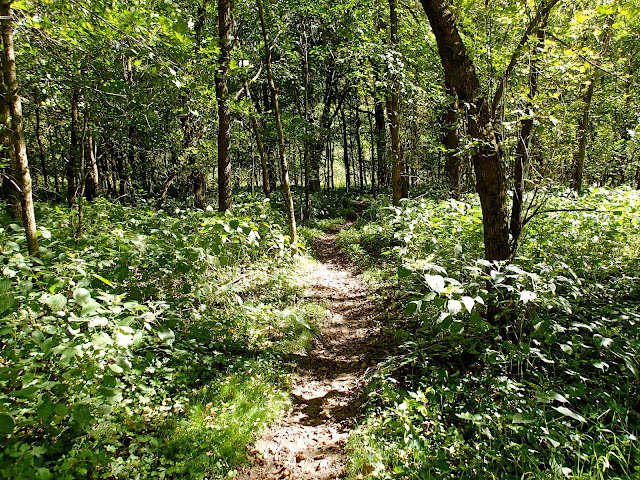 Then, at the end of the trail I reached the stream. It was time to stop pontificating and enjoy the simple idea of catching trout! I saw them immediately, right there in the shallow water that crossed the continuing trail. Stopping in my tracks to avoid spooking any more, I tied on the biggest hopper in my box, this is hopper season after all, and started launching casts against the adjacent bank. Strikes started happening immediately. I enjoyed a good 20 - 30 minutes without moving more than 20 feet upstream from the trail. 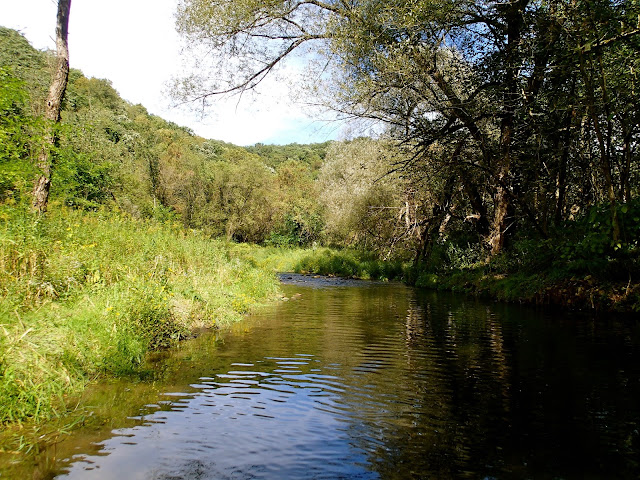 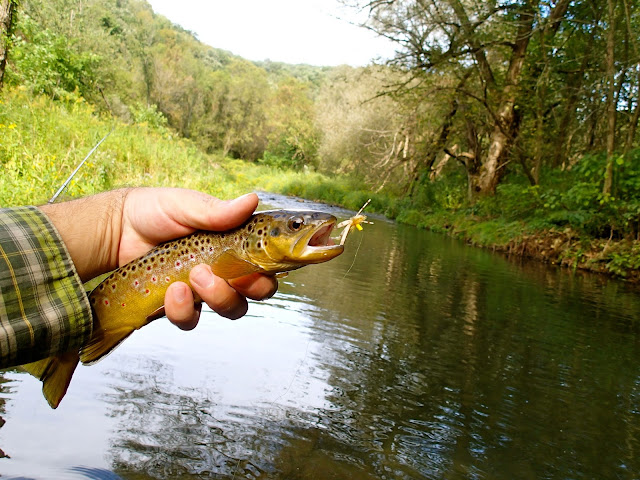 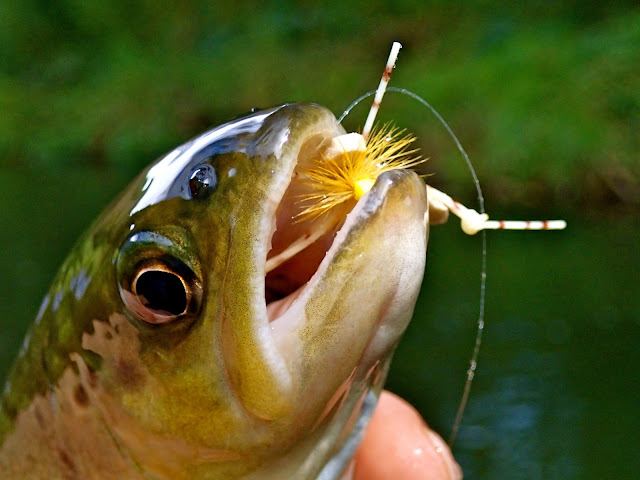 I moved slowly upstream. Not only because the fishing was good, but because I was alone. I made casts to silly places, some of them even produced. I spoke out loud to the fish. Actually I do that in front of people too. I stood with the sun on my back for the better part of an hour at one hole and tried about 4 different flies until a small white mayfly imitation gained the attention of my quarry. I'm guessing it was one of those white little tricos that everyones been talking about lately, but I'm not sure. It was gratifying to get it right though.

My 3x leader was not particularly optimum at presenting these little things however, and I was eager to find more hopper loving fish, which I did just a little further upstream. 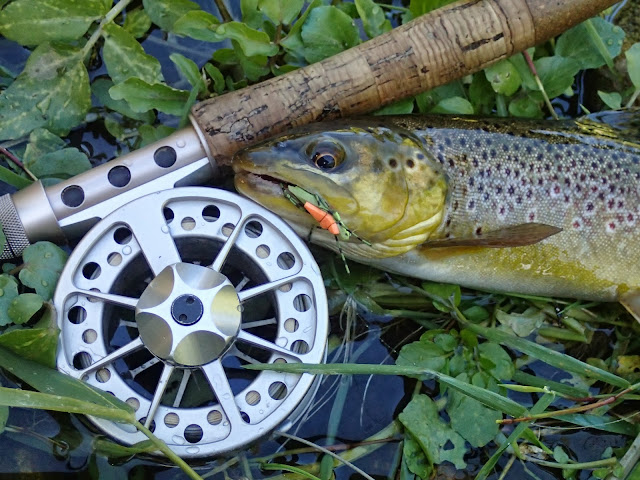 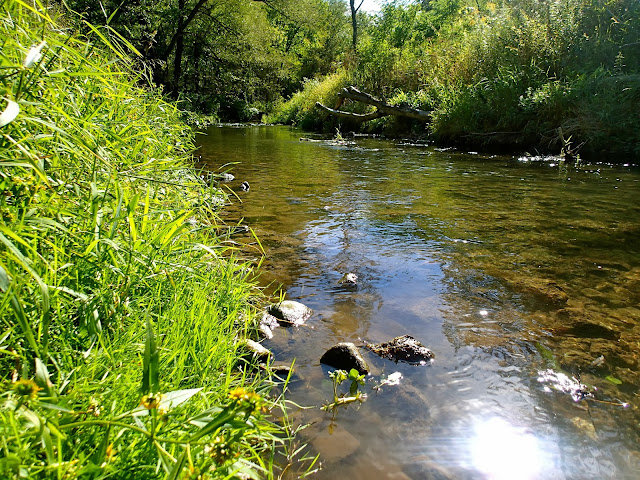 Looking at the satellite images of this area later at home, it was revealed that I barely made it around the first corner on this stream. It's exciting to think that there's so much more to explore, the only thing is, the next legal exit, without turning around and heading backwards is about 5 or more steam miles away. At the pace I was going, this would have taken over a day. Would anyone really be able to find my tent? Hmm...

I left sooner than I needed to, with quite a bit more daylight left. I did it because I wanted to eat trout that night and had my limit in my creel. If I ever go entirely "C 'n R", it will be because of the pressure of getting my catch back to the cooler before it spoiled. What a pain.

I picked up some extremely goofy looking beer at the coop in Viroqua, because it looked goofy, and headed to the free campground in Viola. After setting up my tent, I awaited Trapper's arrival. He texted he had some fire wood for me to use. This might have been a solo trip, but I sure didn't mind some company at camp, especially if that company was providing a campfire to hang out around. Unlike myself, Trapper fished until dark, so by the time he showed up, the trout was eaten and the weird beer was nearly consumed.

Trapper left me to await the impending rain. And it did rain, pretty hard. My tent held out well, with its fresh coat of ReviveX. But the sound kept me awake most of the night. Daylight arrived and I left my tent up in hopes that it would dry up while I was fishing.

This morning's creek would be a creek that I've fished many times, but a new section. A section that was not improved or surrounded by public land. As I started upstream, I was in to fish pretty quickly, though nothing crazy. The craziness wouldn't start until the rain started. This sent nice chunky browns from the banks after my streamer. After several consecutive strikes or hook ups in a row, I decided I loved the rain. This peak fun-time culminated to a 16 inch brown. 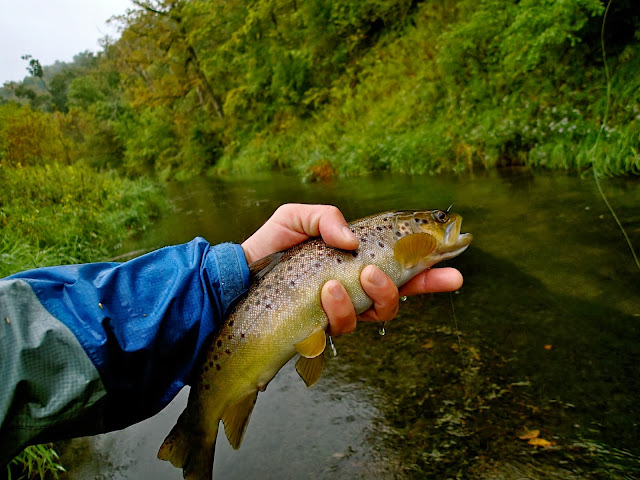 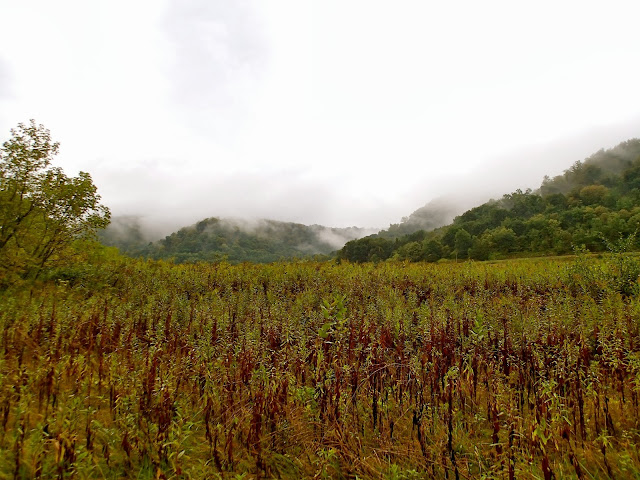 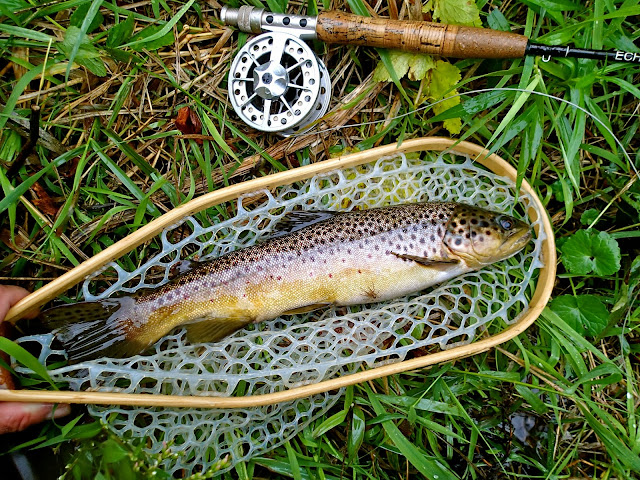 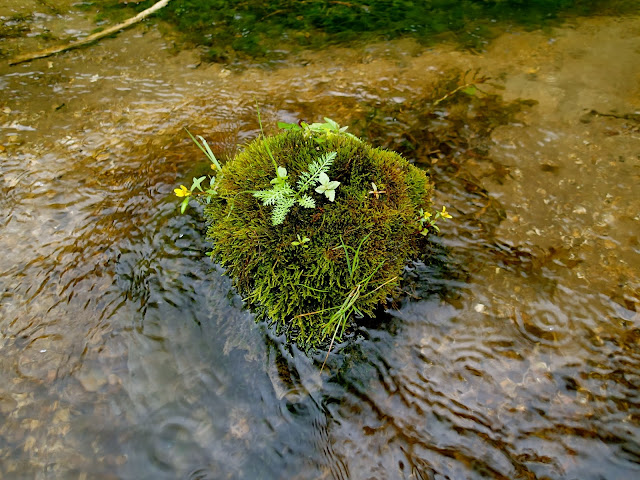 Making my way further upstream the rain stopped and so did the feeding frenzy. The stream, although curvy and deep, seemed to slow significantly. With a few nice trout in the bag, I decided to head back.

I made a  couple of more stops on the way home though at this point I was tired and making half hearted casts to uncooperative trout. I had completed my solo journey was feeling a bit lonely, to be honest. But didn't I say earlier I preferred going solo? More research into this matter is clearly in order.